No, not the opera by Prokofiev but Robert Carsen’s rather brilliant take on Mozart’s Idomeneo recorded last year at the Teatro Real in Madrid*.  It’s a contemporary Mediterranean setting.  Crete is a completely militarised society.  Everyone is uniformed and carries weapons.  The Trojans are refugees living in a camp with all the pathetic accoutrements of refugee camp life.  Idomeneo and Elettra stand for the traditional “Make Crete Great Again” kind of nationalism while Idamante and Ilia look forward to a world where “Us” and “Them” dissolve in our common humanity.  Carsen, Neptune, this writer and, I think, listening closely to the music, Mozart side with the young lovers. In many ways the production is classic Carsen.  The stage is almost bare; a sort of shingle beach.  Props are minimal; some fencing, a few mess tables, a couple of oil barrels.  The visual interest comes from the use of the very large chorus (does anyone direct a large chorus better than Carsen?) and from video projections by Will Duke which are always evocative and occasionally, as in the storm scene, quite spectacular..  The palette is Feldgrau; almost unrelentingly so.  It’s also quite dark much of the time.  It’s grim but appropriately so. 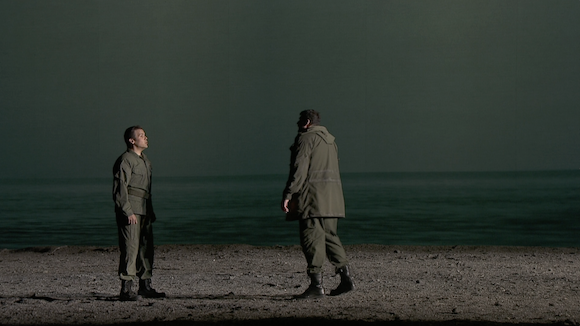 There are some top notch performances.  David Portillo and Anett Fritsch as the lovers sing stylishly and are very touching.  Eric Cutler sings heroically  in the title role but also conveys the inner conflict and emotional vulnerability required.  Eleonora Buratto is an interesting Elettra.  She’s an excellent singer and actress and manages a convincing Elettra without the histrionics and scenery chewing we sometimes get.  Perhaps in a more conventional production it would feel like something was missing but here it feels right.  Benjamin Hulett impresses as a very solid Arbace.  The chorus is quite fantastic.  They convince in everything Carsen asks of them and sing with both power and at times great beauty.  Ivor Bolton in the pit seems at one with Carsen and gives a reading of the score that is deeply humanistic.  In some ways the music felt familiar but in other ways I felt I was hearing at for the first time. Video direction is by François Roussillon and I don’t think it could be bettered.  He really conveys the dark, bleak pictures that Carsen creates.  It looks good on Blu-ray but I fear it may more or less turn to mush on standard DVD.  Both DTS-HD-MA  and stereo sound tracks are excellent.  The. only extra on the disk is a cast gallery and the documentation is a bit light though it does include a very good, short essay by Carsen.  Subtitle options are English, French, German, Korean and Japanese. 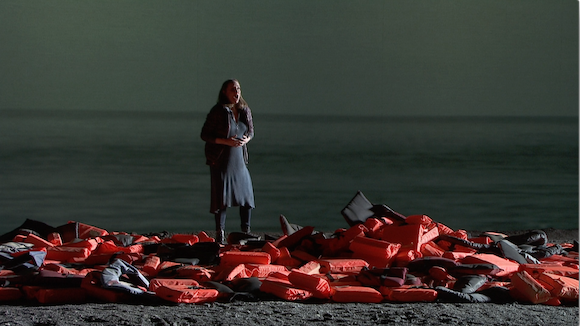 There aren’t a lot of modern video recordings of Idomeneo.  The main competition to this one is probably the Munich recording which is extremely quirky (especially the video direction) but is the only other Blu-ray version.  Impressed as I was in many ways by the 2006 Salzburg recording, this new one trumps it in pretty much every department. 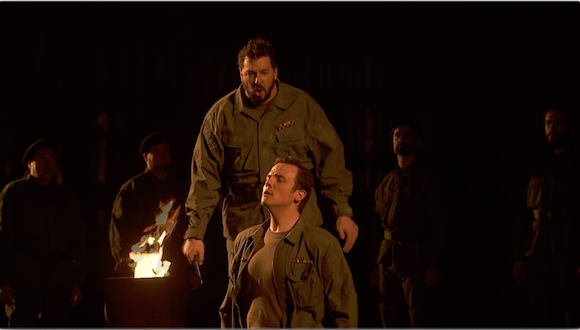 But really looking at the competition here is a bit pointless.  Carsen has found something in this work that goes beyond anything I’ve previously scene.  It may not work for everyone but I find it deeply moving  For me, this kind of exploration of what opera can tell us about ourselves; individually and as a society, is what opera is all about. *It’s a COC, Royal Danish Opera, Teatro dell’opera di Roma co-pro so Danes, Romans, countrymen you know what to look out for. 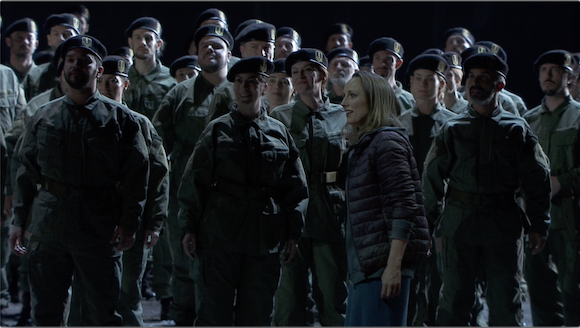 10 thoughts on “War and Peace”