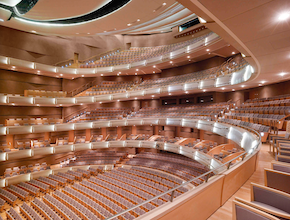 So no big launch event to herald the COC’s 2022/23 season announcement, just an email.  I’m not surprised because if the season had been announced in front of a large crowd at the Four Seasons Centre there would probably have been a riot. There are six productions on the main stage and each gets only seven or eight performances for a total of 45 which is the lowest since the house opened.  Five of them are revivals and there’s no Parsifal.  I begin to think that I have more chance of finding the Holy Grail than ever seeing Parsifal in Toronto.

So what do we get?

From January 27th to February 18th 2023 it’s Claus Guth’s now venerable take on Mozart’s The Marriage of Figaro with Luca Pisaroni, Gordon Bintner, Louise Alder, Johanni van Oostrum and Emily Fons.  Harry Bicket is conducting which is a plus.

Finally from May 5th to 27th 2023 it’s Paul Curran’s production of Puccini’s Tosca with a far from starry cast.

There are also three performances of Kye Marshal and Amanda Hale’s Pomegranate at the Canadian Opera Company Theatre; June 2nd to 4th 2023.

A premier subscription (all six shows) will set you back anything from $186 (Ring 5 Middle) to $2152 (Grand Ring) with 3 and 4 show packages also available.

If you haven’t figured it out by now I’m not terribly impressed.  No doubt there are financial pressures but I just don’t see this line up bringing people back to the opera house.  It seems to be an article of faith among opera company managements in Canada, certainly the COC, that the way to bring the audience back is to offer the familiar and, certainly, the unchallenging.  I am absolutely not convinced.  A bolder approach might be riskier but is suicide by a thousand cuts really the way forward?