Stanisław Moniuszko’s Halka is sometimes regarded as Poland’s national opera.  It’s one of those mid 19th century works that tries to create some kind of national idiom broadly within the framework of the musical style of the age (the composer was conservatory trained in Berlin).  It’s really quite good but rarely performed outside Poland so it’s interesting to look at it, especially in a rather good production by Mariusz Treliński that was given and recorded at Theater an der Wien in 2019.

The plot is fairly conventional.  A nobleman, Janusz, has seduced the peasant girl Halka and got her pregnant.  She’s still infatuated with him so when she shows up on the eve of his wedding to an equally aristocratic bride things get tricky.  Janusz tries to bribe Jontek, another peasant who is in love with Halka, to take her away but Halka is convinced she can win Janusz back.  During the wedding celebrations she has. a miscarriage and, although “the people” start to realise what is going on and turn against Janusz there is little help for Halka who buries her dead child then drowns herself.

Treliński moves the setting to Poland c. 1970.  Janusz’ bride Zofia is the daughter of the rich businessman Stolnik and Janusz is either a business associate of Stolnik or perhaps a party official he needs to keep sweet.  The weddiing (the whole opera actually) takes place in the sort of hotel that only foreigners with hard currency or the local business/political elite got to use.  The “people”, including Halka and Jontek, are hotel staff.  The wedding and the whole Stolnik/Janusz set are spectacularly vulgar in a nouveau riche sort of way and it works brilliantly.  The original social context, which was daring when the opera premiered, might seem very tame now but moving it into a world of oligarchs with political connections brings it alive.

It’s helped by some really good singing and acting.  Halka is Corinne Winters.  I’ve admired her work before but this is just special.  She has a lovely lyrical soprano voice but it’s her ability to inhabit Halka that impresses.  It’s often hard to watch but incredibly moving.  She’s backed up by a fine cast of mainly Polish singers.  Jontek is Piotr Beczała who as ever displays a spectacular tenor voice and real acting skills.  Tomasz Konieczny as the unlikable Janusz is equally impressive.  There are good performances too from Alexey Tikhomirov as the self-important Stolnik and Natalia Kawalek as his spoiled and tasteless daughter.  There’s a nice cameo too from Lukasz Jakobski as the obsequious hotel manager Dziemba.  The chorus has a lot to do here and, as usual in this house, it’s the excellent Arnold Schoenberg Chor who seem to be able to operate with equal effectiveness in just about any language.

The score is quite conventional.  It’s lushly tonal and through sung though it’s also definitely a numbers opera with rather good arias for the principals and some effective ensembles.  Unsurprisingly it incorporates elements of Polish folk and church music and does so quite effectively   Given the quality of the cast it’s no surprise that the big numbers get the full blown romantic treatment and conductor Łukasz Borowicz gets an appropriately rich sound out of the ORF Radio-Symphonieorchester Wien while supporting his singers sensitively. 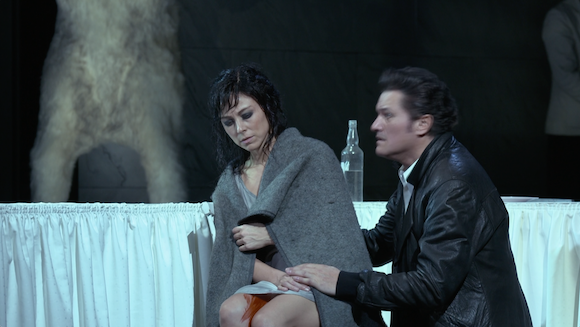 There are two features of the production that make it diifficult to film.  There’s a revolving set, and with it some difficulty in grasping what was actually seen in the house.  Also much of the stage is very dark a lot of the time.  In the circumstances Tiziano Mancini does a very decent job of the video.  I can’t tell if the experience of watching it is very different from what the house audience saw but the film does, i think, capture the essence of the production.  The sound (DTS-HD and hi-res stereo) on Blu-ray is very good and the video is not at all bad given the light levels.  It’s definitely one where there is a clear case for Blu-ray over DVD.  The only extras on the disk are some trailers but the documentation is quite good.  There’s a track listing, a much needed synopsis and a pretty good essay which, for once, covers both the performance history of the piece and the whats and whys of this production.  Subtitle options are English, German, French, Korean and Japanese.

All in all this is really compelling music theatre well transferred to disk.  The work is high quality and deserves to be seen more widely.  The performances are fine with some really high quality tenoring from Beczała and a brilliant all round performance by Winters.  It’s also a good example of a director finding a setting that makes sense to a modern audience while respecting the original.