There’s been a lot of talk recently about whether or not it’s legit to change text, music or dramaturgy for problem operas like Madama Butterfly.  I get pretty frustrated by this because it happens all the time in Europe, especially in the German speaking countries, a fact which seems to escape the notice of many involved in this debate.  Usually it’s the dramaturgy that gets changed.  Changes to the music are rare indeed and, traditional playing with operetta dialogue aside, the libretto usually doesn’t change.  And, of course it’s not just “problem operas” that get the treatment.  Today I’m going to write about a “concept” production of Weber’s Der Freischütz recorded at the Vienna State Opera in 2018.

There’s nothing particularly controversial about the plot of Der Freischütz unless one is extremely sensitive to how huntsmen and Satanists are portrayed on stage.  On the other hand the plot is extremely silly and perhaps really does cry out for a fresh approach.  Here, Christian Räth has decided to change the core story.  Rather than an off-form huntsman, Max is a composer who must finish his opera before he can marry Agathe but he has writer’s block.  To overcome this he must get in touch with the darker side of his psyche and release its creative powers.  There’s much that’s incongruous in imposing this on the original tale of huntsmen and magic bullets but that’s OK.  It’s his psyche after all, not “reality” (whatever that is).  Räth is also to some extent playing for laughs; sending up not just some of the plot absurdities but also operatic convention. 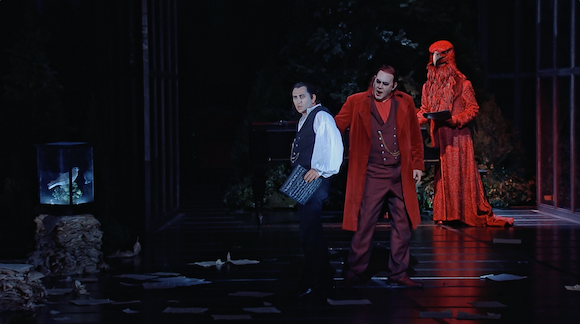 Like so many such concept productions it works better in some places than others but if one is prepared to go with the flow it’s fun with lots of striking imagery and effects and some interesting takes on the main characters.  The pair of ladies present a nice contrast.  Camilla Nylund’s Agathe is the the sort of naturalistic core of stillness around which much else revolves.  Her foil is the Ännchen of Daniela Fally.  She’s a bundle of impish energy dressed in men’s clothes and a rather striking blonde wig and showing a not always sisterly affection for Agathe.  She’s also playing for laughs and doing it very well. 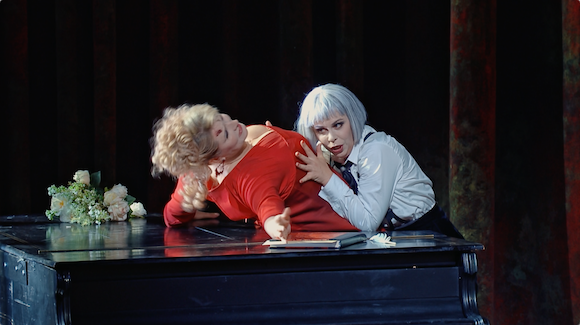 Andreas Schager’s Max and Alan Held’s Caspar are larger than life.  They are both very big men and here are made up in a distinctly non-naturalistic way and they tear the stage up with tremendous energy.  There’s exploding sheet music, Held in the Wolf’s Glen playing a flaming piano and a succession of really weird spirit birds; one of which is Agathe as the dove.  To cap it all the Hermit at the end descends from the fly loft in a sort of cross between a disco ball and a pulpit to sort things out in true deus ex machina fashion.  It’s all a bit crazy.

It probably wouldn’t work nearly as well if it wasn’t musically excellent.  There is singing here of great beauty and power from the principals and the supporting cast, the chorus and orchestra are all first rate.  Tomáš Netopil’s conducting is exemplary.  It’s all backed up by judicious video direction by Agnes Méth, excellent video and sound (stereo and DTS-HD-MA) on Blu-ray.  The documentation is useful; describing what we are going to see but not attempting to justify it plus there’s a full track listing.  Subtitle options are English, French, German, Korean and Japanese.

I actually wasn’t really looking forward to reviewing this disk as the concept sounded too forced to work but I ended up enjoying it a lot.  The slightly tongue in cheek approach and the energy on stage lift it out of the realm of the overly didactic.  It’s fun.