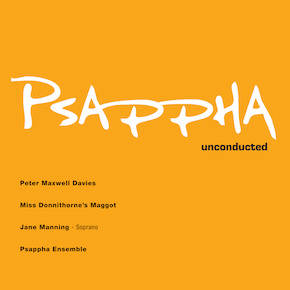 Miss Donnithorne’s Maggot is a sort of companion piece to Peter Maxwell Davies’ Eight Songs for a Mad King.  Indeed, the idea was suggested to the composer by the librettist at the after party for the premier of Eight Songs, or at least so Maxwell Davies claims in the interview that follows the performance on the recording.

The idea comes from the life of a reclusive lady in Sydney who may have been the model for Dicken’s Miss Haversham.  She’s a bit nuts but in an altogether less depressing way than king George.  It’s another theatrical performance piece (apparently repeating many of the gestures from Eight Songs but, obviously that’s not apparent in an audio recording).  Once again the piece is scored for.vocalist, this time a mezzo, and small ensemble.  The degree of extended vocal technique required here is less than in the earlier piece, maybe on a par with something like Pierrot :Lunaire.  The ensemble though is supplemented with all kinds of toys including four metronomes, a football rattle and a whistle.

The recorded performance is by the late Jane Manning (a soprano not a mezzo) and the Psappha ensemble and it was recorded with the participation of the composer in 1974 so I think we can consider it as being as it ought to be.  It’s available from NMC records as hi-rres MP3 (44.1kHz/320kps) or FLAC.  I listened to the former and it’s actually very good indeed.

As mentioned above there’s an interview on the recording too.  I’m not sure who the interlocutor is but the composer is very forthcoming on the origins of both Eight Songs and Maggot, on his compositional technique and much more.  There’s also something a bit shocking that I’ll leave as a surprise!