Soundstreams’ on-line concert, Lovesongs, recorded in Koerner Hall and streamed (access codes are PWYC, min $7) features three works; two by and one “in homage” to Claude Vivier with an intro by Lawrence Cherney and David Fallis who conducts on the first and third pieces. 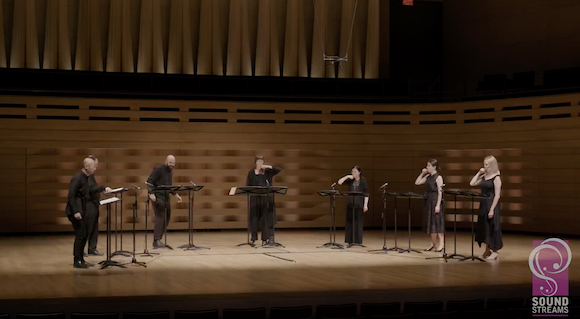 The first piece, Vivier’s Lovesongs, was written for a dance company and, apparently, should be able to be performed by untrained voices.  I’m not so sure.  It’s scored for four women and three men.  In this case that’s Carla Huhtanen, Lindsay McIntyre, Robin Dann, Vania Chan, Bud Roach, Keith Lam and Alex Samaras.  The piece consists of fragmentary text from various sources including nursery rhymes, Romeo and Juliet and much more in a variety of languages including an invented one.  The vocalists are required to use a wide range of techniques from pitched singing to Sprechstimme to whispering to shouting and much more.  There’s no story line but there is interaction between the “characters”.  It veers between the structured and the chaotic; the lyrical and the violent.  I found myself wondering how much of it was “determined” by the score and how much was more or less improvised.  It’s impossible to tell with Vivier without having the score!

Vivier’s Hymnen an die Nacht is quite conventional by contrast.  It sets extracts from a work by the German romantic poet Novalis, written as a eulogy for his dead wife.  It’s scored for soprano (Carla Huhtanen) and piano (Gregory Oh).  It develops the idea of the night as the gateway to death and the close relationship between death and sleep.  Modern neurophysiologists would not approve!  The piano part is very sparse while the vocal line at times sounds almost like a 20th century French chanson but with sections of whispering and much more declamatory delivery.  It’s Huhtanen in her element; veering from making sounds of great beauty to rather odder noises!

The final piece is Christopher Mayo’s Oceana Nox.  Apparently Vivier set the Hugo text of that title very early in his career but it hasn’t survived.  The text deals with sailors lost at sea and the parallel between fading memories of them and their physical decomposition.  Mayo builds off this to explore dimly recollected “memories” of the lost Vivier piece.  It’s scored for seven voices, piano and percussion (Ryan Scott) but there are no words.  The “singers” whistle or play pitch pipes or other “basic” instruments.  It’s slow and meditative with lots of silences though in the middle it gets loud and chaotic before fading away quietly.  It’s an interesting way of riffing on Vivier.

The recording is excellent.  The video is 1080p and looks great.  The sound is extremely concert hall realistic and made me wish desperately to be in the hall.  That said, part of the faithfulness is an extremely wide dynamic range that will challenge most domestic sound set ups.  A record company engineer would surely have compressed it.

All in all, fifty or so minutes of really interesting and unconventional music.  The house programme (available on-line) contains excellent notes and full texts.