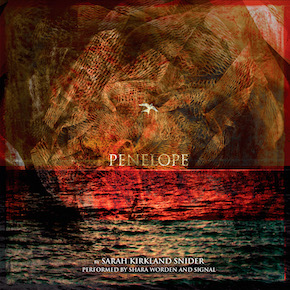 I’ve been listening to Emily D’Angelo’s debut album elageia (find out more in the next edition of Opera Canada).  It features music by Missy Mazzoli, with whom I’m a bit familiar, and by Sarah Kirkland Snider and Hildur Gudnadóttir, who are both new to me.  Like Mazzoli, Snider is an exponent of that kind of cross-genre vocal music that seems to be assuming some significance in the US music scene.  I’ve been listening to her song cycle Penelope which riffs off Homer’s Odyssey from a woman’s POV. Specifically the texts, by playwright Ellen McLaughlin, tell the story of a woman re-engaging with the man she was married to who has gone missing missing for 20 years and returned with PTSD.

The fourteen songs in the cycle are set for solo female voice, chamber orchestra (including guitars and percussion) and electronics all engineered to create a particular soundscape.  It’s somewhere between art song, synth pop and folk.  At times quite hypnotic, at others it’s quite disturbing and very difficult to describe.  At times harp and strings interact in a rather soothing way and then one gets hit with guitar, drums and electronics!  It’s clever and original.

The album is performed by classically trained vocalist Shara Worden (aka Shara Nova of My Brightest Diamond) and the chamber ensemble Signal conducted by Brad Lubman with sound design by Michael Hammond.  It has to be said that Worden’s singing on this album is far from classical but then she’s performed in a range of styles (as well as playing multiple instruments) so that’s no big surprise.  It’s all very skilfully done and beautifully engineered.  I can’t pretend that this is the sort of music that will appeal to every opera or art song lover but I find it intriguing.

Economic and audience conditions post pandemic (at least in North America) are going to lead to a lot of searching for ways of combining text, drama and music that are much cheaper than fully staged grand opera.  This kind of cross genre work may be one strand in that future.