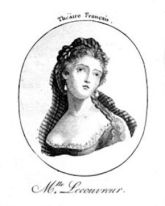 VOICEBOX:Opera in Concert have a streamed version of Cilea’s Adriana Lecouvreur premiering on Friday.  It’s a film made at the Edward Jackman Centre that reimagines the opera as a game of chess.  Natalya Gennadi sings the title role with Julie Nesrallah as the Princess de Bouillon.  The cast also includes Holly Chaplin and Evan Korbut.  Tickets are $20 from www.operainconcert.com and the stream will be available until July 2nd.