I’m rather a fan of the productions on the lake stage at Bregenz.  It can be a bit hokey and the productions, though spectacular, aren’t usually particularly deep but they are fun to watch.  The 2019 production of Verdi’s Rigoletto might just be the best I’ve seen.  It takes spectacular to new heights, it’s got some interesting ideas and the performances are very good indeed.

Phillip Stölzl’s concept is a good one; especially for a production of this type.  The duke and his court are replaced by a travelling circus.  The duke is the ringmaster, Rigoletto is a clown, Sparafucile and Maddalena are a knife thrower and his assistant etc.  There are also four apes dressed as hotel pageboys who do the duke’s dirty work for him.  And, of course, a circus provides lots of opportunities for crowds of extras to look spectacular including, four example, the scantily clad aerialists who perform over the duke’s head during “la donna e mobile”. 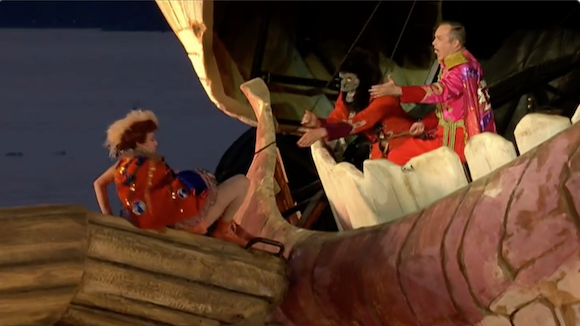 The set is amazing.  It’s not just that there’s an enormous clown head and a giant hand, they move.  The mouth opens and closes as do the eyes and the head can be moved around on a giant arm.  The individual fingers of the hand articulate.  Characters appear in the mouth and the eye sockets.  For example when the apes kidnap countess Ceprano they bundle her onto the hand which lifts her to the mouth where the duke and another attendant ape are waiting.  When he’s done they catch her and chuck her in the lake.  There’s also an enormous helium balloon from which Gilda sings “Caro nome” before her stunt double (I hope) is bundled down a 15m wire into the mouth by Ceprano who has somehow climbed up to the balloon.  The storm scene is spectacular to the max.  The technology and the direction are beautifully integrated.

None of this would matter of course if the performances weren’t up to snuff but they are actually very good.  Stephen Costello, who sings the duke, has lost none of the Italianate qualities and ringing high notes that he showed at the COC.  This is a swaggering, whip cracking duke who makes a really nice contrast with the rather more subtle Rigoletto of Vladimir Stoyanov.  He’s the sad clown personified and is also a top notch Verdi baritone.  Mélissa Petit’s Gilda is beautifully sung but quite understated dramatically.  By design I think.  I also really like Miklós Sebestyén’s skeleton clad Sparafucile and Katrin Wundsam’s very seductive Maddalena.  In fact, all the supporting roles are done well.  The orchestral playing from the Wiener Symphoniker is often very exciting and Enrique Mazzola holds everything together very well despite (perhaps because of) some very brisk tempi in places. 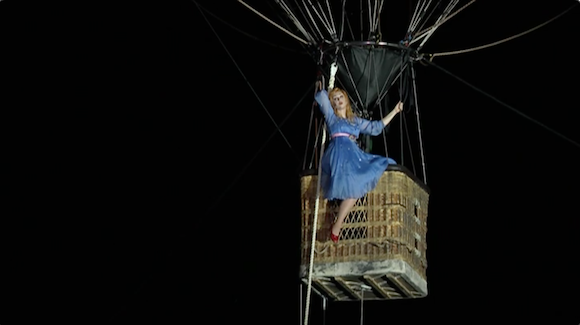 I watched this on DVD though Blu-ray is available.  The video direction (Felix Breisach) is good.  These productions are quite hard to film but I think we get a good idea of what’s going on.  Sound (PCM and DTS5.1) and video (from a 4k master) are perfectly acceptable.  The booklet is informative but better is the half hour long “making of” documentary.  It’s worth watching not just for the insight into what it took to build and operate this set but also into the logistics of a production on the lake stage.  Subtitle options are English, Italian, French, Spanish, Korean and Japanese.

This was very enjoyable and it’s made me curious to explore whether other directors are doing interesting things with Rigoletto.

2 thoughts on “Rigoletto on the lake”