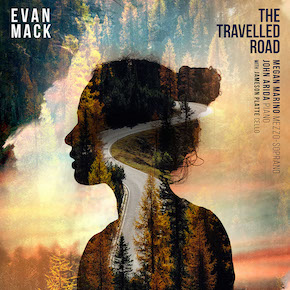 The Travelled Road is a new recording of songs by Saratoga Springs based composer Evan Mack.  Mack sets a rather eclectic set of texts and his musical style is varied.  His roots in opera are evident and I enjoyed these songs much more than most American art song that comes my way.

The first piece is A Little More Perfect and it sets Justice Anthony Kennedy’s opinion in Obergefell vs. Hodges; the case that effectively legalised same sex marriage in the United States.  It’s scored for mezzo-soprano, piano and cello.  It starts out quite sparely, though the cello is quite lush from the beginning and then builds to a much more operatic climax.  Megan Marino has the heft to carry the louder bits and she has near perfect diction.  She’s well supported by John Arida on piano and Jameson Platte on cello.
Three Reflections of Sister Dorothy is a committed piece setting three meditations on social justice by an American nun who was murdered in the Amazon in 2005.  The music is fairly straightforward, tonal and lyrical but it serves the text well and builds to a powerful, surging finale.  Excellent work again from Marino and Arida.

I think Preach Sister, Preach is my favourite piece.  It sets fourteen texts by thirteen different women on ” being a woman”.  The pieces are short; ranging from 26 seconds to just under two minutes, and run the gamut from Mae West on “good girls” via Lizz Winstead’s “I think therefore I’m single” to Anne Landers on sex.  Both text and music are witty and fun and Marino is quite brilliant; somehow conveying thirteen different characters and moods in under thirteen minutes!

The Secret Ocean sets three poems by Mark Jarman on parenthood and wisdom.  This is bordering on the territory that sometimes makes me give up on American song but just manages to avoid it.  The mood is meditative and at least Mack eschews sentimentality.  Not my favourite piece but it’s OK.

The record ends with a dramatic setting of Carl Sandburg’s The Road and the End.  Platte is back with his cello and Marino has to navigate a tough sing with a wide vocal range and fairly extreme dynamics.  It’s a good piece and a fitting end to some interesting settings of committed texts.