Regular readers of this blog would probably expect that, faced with a Zeffirelli production of Il Trovatore from the Verona Arena, I would run screaming for the hills.  The 2019 recording though piqued my interest.  The geek in me wanted to see how much difference 4K ultra HD made, having only so far been able to get my paws on a couple of such recordings.  I was also aware that it’s quite some time since I’ve heard Anna Netrebko and here she heads up a very appealing looking cast.  So I succumbed.

So this Zeffirelli thing is super spectacular.  Given the scale, the sets are incredibly detailed and there are, at times, hundred of people in the stage area.  There’s a lot of soldiers brawling back and forth on foot and on horseback.  Unsurprisingly the whole thing is textbook opera medieval.  The gypsy camp is packed with people in opera gypsy costumes with loads of dancers showing plenty of thigh.  For the scene where Leonora is about to become a num the big tower at centre stage opens out to form a golden gothic cathedral while hundred of nuns with electric candles and priests/monks in Ku Klux Klan outfits carrying statues of saints.  Costumes are incredibly detailed and sparkly.  Liberace would have loved the Conte di Luna’s outfit.  But there’s nothing interesting or different about the way the story is told and the acting is mostly old style grand opera.  It’s spectacular but not dramatic.

What is both spectacular and dramatic is the singing.  This is a very fine cast and Netrebko is superb.  Since I last heard her the voice has become bigger and lusher but it’s still agile and pin point accurate.  D’amor sull’ali rosee is quite breathtaking.  Her acting impresses me less than it used to.  There seems to be an element of “I’m the diva so I’ll act like a diva” but that may be the venue and the production rather than any diminution in her abilities.  Mr. Netrebko, Yusif Eyvazov, is a really good, strong, Manrico with all the notes and lots of presence.  Luca Salsi is an impressively robust Conte di Luna and you can’t really go wrong with Dolores Zajick as Azucena.  Top marks too to the hundreds of chorus members, dancers and extras.  Pier Giorgio Morandi unsurprisingly goes for a full on red blooded account of the score.  Overall, this is musically very good.

Tiziano Mancini directed the video.  In 4K it’s spectacular.  There’s so much detail it’s almost overwhelming.  This might be the best picture quality I’ve ever seen on an opera video (and bear in mind that while I have a 4K player my screen isn’t actually 4K though the improvement over standard Blu-ray is really clear).  There’s nothing fancy about the sound.  No Dolby Atmos, no multi-channel LPCM.  It’s the standard choice of DTS-HD-MA multichannel or LPCM stereo.  It’s very good though on both options.  There are no extras on the disk.  The booklet has a powder puff essay plus a synopsis and track listing.  Subtitle options are Italian, English, French, german, Korean and Japanese.

There are also DVD and standard Blu-ray releases of this disk.  To be honest I wouldn’t even think about the DVD unless you were planning to just listen!  If you have 4K this is definitely worth seeing and a valuable addition to the very small number of 4K opera videos.  If you don’t and you are a fan of fine Verdi singing then the Blu-ray may well be worth a look. 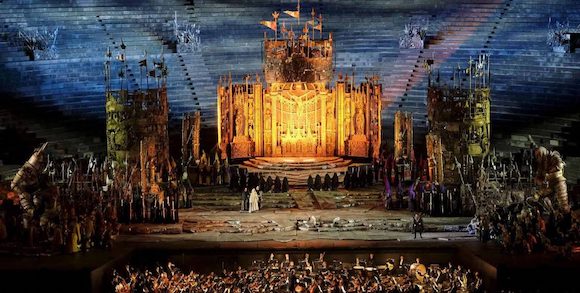 Note:  I can’t screencap 4K so the pictures are mostly taken from the record company promo video.