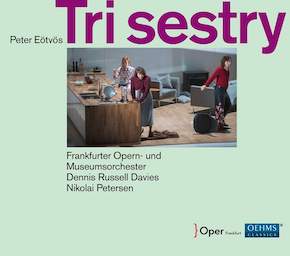 Peter Eötvös’ 1998 opera Tri sestry is based on the Chekhov play and was recorded live at Oper Frankfurt in 2018. It takes fragments of the original Russian play and recombines them in a non-linear way to create a prologue and three “Sequences” from the points of view of Irina, Andrei and Mascha repectively. The recombination is complex enough for the accompanying booklet to contain a table mapping Chekhov’s scene order to Eötvös’. There’s no libretto in the CD package so even flipping between the (fairly detailed) synopsis and the track listing it’s hard to figure out who is singing or about what. No doubt this was much clearer when watching the stage production.

Matters are not made any easier by giving all the female roles to male singers. The sisters and Natascha are given to counter tenors while the nanny Anfisa is sung by a bass. This is fine except that a non-trivial amount of text is spoken and counter tenors sound just like any other male when speaking which further increases the difficulty of keeping things straight, especially with a cast of thirteen characters! Non-Russian speakers are unlikely to be able to follow much of the text anyway as singers sing over each other for most of the first two Sequences. It does get a bit more open and sparer in the third sequence and someone with a strong knowledge of the language will likely pick up nuances there that I missed.

The music is modern and complex. It doesn’t seem to be built around any particular theory but mixes styles up a lot. The Prologue and the first Sequence use a lot of tuned percussion with swelling chords and long sustained lines. It feels like the equivalent of an abstract painting being built up with a palette knife. The second Sequence is darker and more violent with extended vocal technique representing drunkenness. At times though it becomes somewhat minimalist with quite lyrical vocal lines that inspire some fine singing from Ray Chenez as Irina and Barnaby Rea as Soljony. As mentioned earlier, things lighten up considerably for the last Sequence with much less dense orchestration and less vocal ensemble work.

It’s hard to judge singing performances most of the time in a recording like this as it’s so hard to tell who is singing what but it does seem to be a skilled, committed ensemble cast. When things open up a bit in Sequence 3 it’s a bit easier to differentiate and finally be able to recognise two very capable Canadian singers; baritone Iain MacNeil in the cameo role of Werschinin and counter tenor David DQ Lee who contributes a rather dark mezzoish tone as Mascha to the otherwise rather bright set of high voices. The Frankfurter Opern-und Museumorchester cope well with everything that’s thrown at them. Two conductors are credited; Dennis Russell Davies and Nikolai Petersen. I assume the recording was patched together from takes on different nights.

The recording is generally clear and well balanced though there is a lot of production noise at times. It’s so intrusive in the Prologue that I took off my ‘phones to check if my neighbour was renovating!

Overall, I found this a bit frustrating. The work is interesting and I would certainly go and see a staged performance but it doesn’t really come across well on CD, especially absent a full libretto.

This review first appeared in the Spring 2020 edition of Opera Canada.