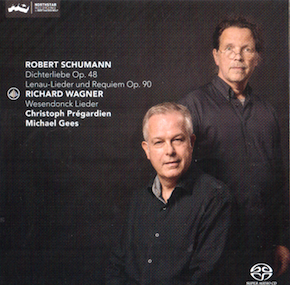 I’ve been listening to Christoph Prégardien and Michael Gees’ new Schumann and Wagner recording for a number of reasons.  I was very impressed with Prégardien when he appeared at Toronto Summer Music in 2018.  I’m not familiar with the Schumann Op.90 Lenau Lieder und Requiem.  I don’t think I have ever heard a tenor sing the Wesendonck Lieder.  And, this is the first SACD of a song recital to come my way and I wanted to see if it made any appreciable difference.

The first set on the disk is the well known Dichterliebe Op.48 of Schumann.  It’s a lovely delicate reading.  Every word is clear and it’s just really good Lieder singing.  The Wagner set is interesting.  It works fine for tenor voice despite being marked “für Frauenstimme”.  Again, just really excellent classic style.  The Schumann Op.90 is OK but not the most compelling set of songs I’ve ever heard.  Well sung and played though, of course.  So there it is, just over an hour of elegantly, classically sung Lieder with highly skilled accompaniment from Gees.

It’s well recorded too though I don’t think in this case that SACD makes much of a difference over CD.  The technical notes suggest one might hear a small difference if sitting in the middle of an array of identical full frequency speakers but, really, who has that kind of listening set up?  There are decent notes and bios in the booklet and full German texts but no translations.