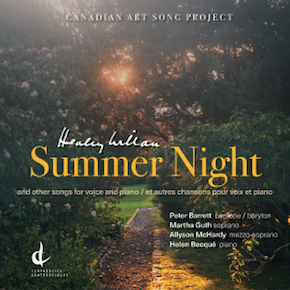 Summer Night is a CD of songs by Healey Willan produced by the Canadian Art Song project and due to be released on the Centrediscs label next month.  Willan is best known as a composer of church and choral music but he also wrote over 100 songs and song arrangements, many of which have not been published, let alone recorded.  There are 28 songs on the CD ranging in composition date from 1899 to the late 1920s.  Most are original settings of the text though a few are arrangements of existing songs; either traditional or by Burns.

The music is very much in the early 20th century English Romantic tradition.  There’s nothing terribly experimental and I’m not sure any of the songs reach the heights of, say, Vaughan Williams Songs of Travel.  That said, they are never less than competently workmanlike and often rather better than that.  I liked the Three Little Songs (1899-1902) which are pleasingly straightforward short love songs.  There’s a robust setting of Tennyson’s The Tourney (1904) which is rather fun.  Yeats’ Lake Isle of Innisfree will never be my favourite Yeats poem but I enjoyed Willans evocative setting.  The two Burns settings are rather good too.  I do think maybe this is an album to dip into rather than play end to end but I’m very glad that it exists.

The performances are really good.  The songs are shared between baritone Peter Barrett, soprano Martha Guth and mezzo Allyson McHardy.  They make a nicely contrasted trio.  Barrett is muscular but musical.  Guth has a clean bright sound which is very different from McHardy’s dark, smokey tones.  Excellent accompaniment is provided throughout by Helen Becqué on piano.

The recordings were made at Grace Church on the Hill in 2016 and 2018 and sound really good.  The ambience is appropriate for art song and everything is quite clear.  The booklet includes a useful essay on Willan’s songs as well as full texts.

It’s a worthwhile disk and well worth hearing for anybody interested in Canadian art song or “the other side” of Willans.