Driftwood Theatre’s Bard’s Bus Tour touched down at Withrow Park yesterday evening in near perfect conditions for their lightly updated musical version of A Midsummer Night’s Dream.  D. Jeremy Smith’s production is cleverly constructed to cover off all the bases with a cast of only eight and with the minimal staging possible for an outdoor touring production.  The updating makes the Mechanicals into Oshawa auto workers.  The music is largely integral; parts of the text being set to music by Kevin Fox and Tom Lillington further adapted and performed by Alison Beckwith with support from various members of the cast.  There are cuts and the whole piece runs about an hour and forty five minutes without an interval. 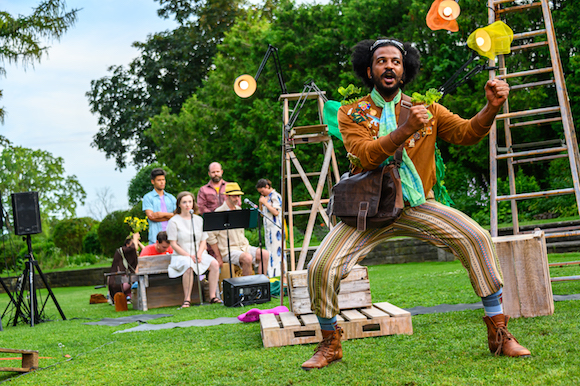 As usually seems to be the case with “plays with music” the singing is a bit variable but here the music is straightforward musical theatre style and the everybody is miked so, if not everybody is a trained vocalist (and some like Marissa Orjalo are) they do well enough.  It’s a good ensemble cast and everyone handles their multiple roles well with strong acting grounded in a real sense of how to speak Shakespeare.  The scene with Bottome and the Fairies is well done with the Fairies represented by hands emerging from the pile of sleeping lovers.  The Helena (Kelsi James) and Hermia (Marissa Orjalo) make a pleasantly contrasted pair in line with the text.  Steven Burley is bluff and sometimes very funny as the redundant autoworker turned ass.

What’s not to like?  Well perhaps the mystery and sinisterness of the Fairy World is missing.  I suspect this is deliberate as this is clearly intended to be a children friendly production.  So, it’s a fun romp that doesn’t drag at all and makes for a very pleasant evening in the park.

Siobhan Richardson as Hippolyta and James Dallas Smith as Theseus

Driftwood are now a week into a month long tour that takes them all over southern Ontario (schedule and full cast credits here).  Torontonians can catch them tonight at Withrow Park and on Tuesday at Guild Park.  I believe there’s an extra date too at the end of the run but it’s not in the schedule. 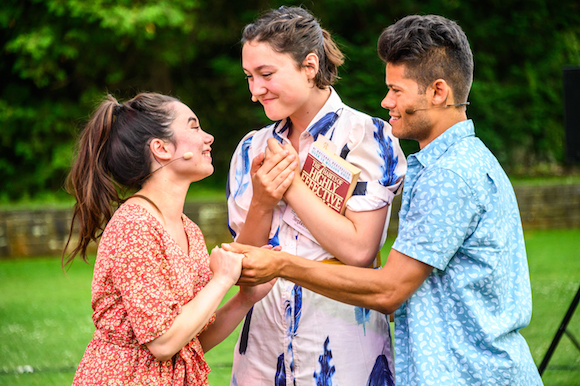 Marissa Orjalo as Hermia, Kelsi James as Helena and Nathaniel Hanula-James as Lysander