Samuel Barber’s Vanessa doesn’t get performed much and the recently released recording of the 2018 Glyndebourne production is the only video version available.  It’s pretty interesting, if perplexing at times, and I’m not as convinced as many of the people interviewed in the “extras” portion of the disk that this is an “under-rated masterpiece”. 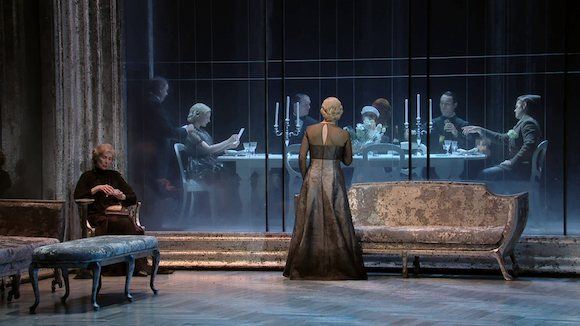 Let’s talk about the opera first.  It’s set in “a northern clime” c.1905 though the Glyndebourne production fast forwards it 50 years.  We’ll come back to that.  The basic plot is very simple.  Three generations of women; the old baroness, her daughter Vanessa and her granddaughter Erika, Vanessa’s niece live on a large country estate with a bevy of servants.  Vanessa had a love affair with one Anatol twenty years before and now, it appears, he’s coming to visit.  The guy who shows up is in fact the, by now dead, Anatol’s son; also Anatol.  Vanessa transfers her affections to him but he’s got his eyes on Erika.  They go to bed and Anatol gets her pregnant but she refuses to marry him so he marries Vanessa.  Erika tries to kill herself but fails and loses the baby in the process.  She confesses to her grandmother who refuses ever to speak to her again.  Anatol and Vanessa go off to live in Paris leaving Erika as the woman who is waiting for something in the big house.

There are all kind of sub text elements that aren’t explicit in the libretto.  What exactly was the relationship between Vanessa and old Anatol.  Did Erika lose the baby in the snow or was agency (the family doctor is another important character) involved?  Pre-marital sex and abortion weren’t issues that could be openly explored on the stage of the Metropolitan Opera in the 1950s.  Nor perhaps could they be even alluded to in an American setting, hence the rather vague location of the opera.

The Glyndebourne production by Keith warner handles all this with a combination of mirrors and projections of “the past” that play out at key moments.  It’s actually quite effective but very difficult to film.  I do wonder too about the translation to the 1950s for the main action.  This means that the original Vanessa/Anatol affair took place in the 1930s.  Now there’s one event that might explain the disappearance of Anatol senior that took place in those 20 years but it’s hard to imagine anywhere in “a northern clime” where aristocratic life went on apparently unruffled.  Odd choice really.

Musically too it’s not hard to see why the piece wasn’t a smash hit in the late 1950s, at least in Europe.  It’s very lush and highly Romantic.  It’s not exactly retro.  Perhaps it’s more like a logical progression from late Strauss.  But that’s a direction that music in general wasn’t taking and it must have seemed something of an outlier.  That said, itis very well crafted.  The quintet “to find, to keep” in the last act is really a gem.  Oddly, the one aria everyone knows “Must the Winter Come So Soon” was a bit of an afterthought, being written because Erika otherwise would not have had an aria.  And it comes right at the beginning.

Choice of time period aside, there’s much to like in the production.  The stagecraft is very slick with moving stage elements and the projections provide interest during what might otherwise be rather dull interludes.  It’s lovely to look at though there are weird continuity things that an expert nit picker like me is bound to pick up.  Really, if you have a household full of servants surely somebody could decant the Romanée-Conti?

The singing is good too.  Emma Bell and Virginie Verrez are well matched as Vanessa and Erika.  Both have lovely voices and a fair bit of heft but the latter does sound more youthful.  Edgaras Montvidas is really quite impressively caddish as Anatol and has the right sort of ringing tenor to carry the music.  It’s a delight to see rosalind Plowwright on stage again as the Old Baroness and Donnie ray Albert is something of a revelation as the Old Doctor; accurately conveying the ambiguous place he holds in the household.  The Glyndebourne Chorus is on fine form and the London Philharmonic create an impressively ;ush and rich sound.  It’s all co-ordinated effectively by Jakub Hrůša, who despite the often very dense orchestration manages to balance singers and pit pretty well. 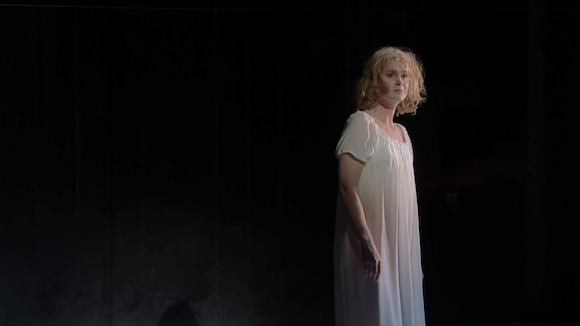 François Roussillon directed the video.  It’s a tough piece to film.  Both mirrors and projections are notoriously hard to film but I think it’s well done backed up by a very good picture on Blu-ray.  Both surround sound and stereo tracks sound very good.  There are about ten minutes of interviews with creative team and cat members on the disk and they are fairly informative.  The booklet includes a synopsis and quite a lot of background material but no track listing.  Subtitle options are English, German, French, Korean and Japanese.

So, it’s an interesting recording of an interesting opera.  I’m not quite at the stage of considering it a “neglected masterpiece” but it’s more interesting than many opera that get performed much more frequently.