Jani Lauzon’s new piece Prophecy Fog at the Theatre Centre is a fascinating and very personal piece.  I write “very personal” because it’s obviously very personal to her but also because I experienced it in a way that I’m sure was not the same as any one else in the room and I suspect that will be true for many people, perhaps most, perhaps all.

The starting point for Prophecy Fog is the Giant Rock in the Mojave Desert, sacred to local Indigenous people but also focus of a great deal of UFO and other nut jobbery.  In the course of time it’s become horribly disfigured by graffiti and surrounded by various kinds of weirdness.  The question is “can something that has been desecrated still be sacred?”

Jani takes us on a journey through her relationship with rocks and stones and the stories they tell us as well as the history of Giant Rock as seen by the stones and her personal experience of it.  It’s remarkably intimate.  It’s essentially a one woman show set in a circle maybe 5m in diameter with the audience in a circle around it.  There’s Jani, a prayer mat and lots of baskets of stones; large and small.  There are four TV monitors which at various times show atmospheric videos or weird 1950s TV about the Giant Rock.  The entire space is covered by a disk on which beautiful projections of the day and night sky are playing.  There’s music.  Most of it is “atmospheric” electronics but there’s also chanting, singing and native flute playing from Jani.  It’s immersive and moving. 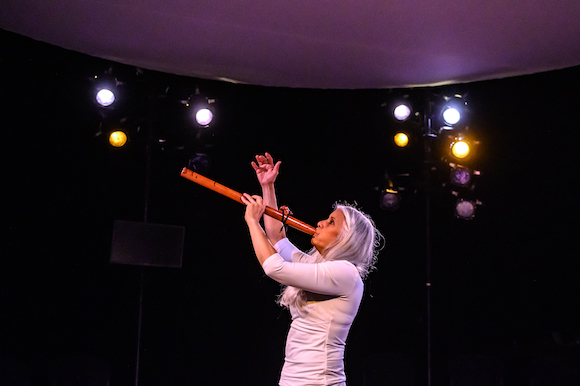 I think Jani answers her question.  A thing is sacred if we make it so; be it a 20m high boulder in the desert or a pebble on the beach.  If it has something to say to us we can hear it if we are prepared to.  My mind wandered to a cold winter’s day on Bwlch y Saethau; the col between Yr Wyddfa and Y Lliwedd.  I was on my own.  There was snow on the wind.  I leaned against a large boulder to shelter from the bitter wind and it spoke to me.  I knew then, I still know, that what they say about that place is true.  For some value of “true”.  It’s not the only time that’s happened to me.  It’s happened on the moors of West Penwith and on the banks of the Mississippi.  That’s how I experienced Jani’s creation.  I don’t know how you might.  That’s for you to find out. 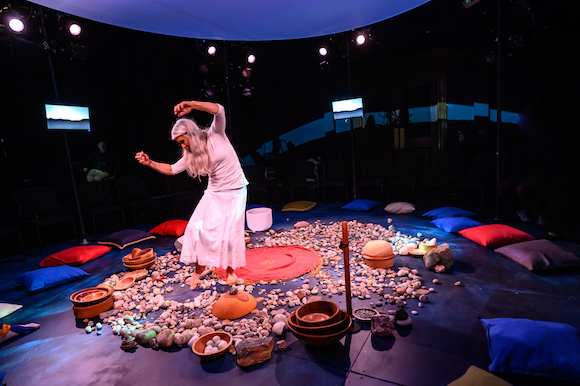 Prophecy Fog runs at The Theatre Centre until May 26th.