I sat down yesterday with Danielle MacMillan who will sing Agni in Against the Grain’s upcoming production of Claude Vivier’s Kopernikus.  Kopernikus is subtitled A Ritual Opera for the Dead and concerns the experience of transitioning from life to death as experienced by Agni.  I had many questions:

And a few more things that bubbled up as we talked.  So here’s a summary. 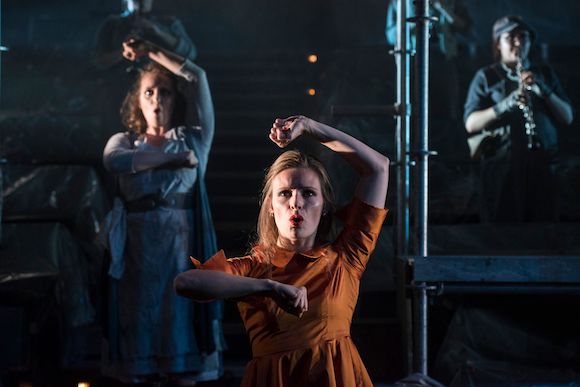 The music – It’s “profoundly melodic” but not in any conventional way.  It’s more the way the notes impact spiritually.  It uses extended vocal techniques including Sprechstimme and it’s rhythmically extremely complex.  But it’s scored through.  There are some performer selected elements in the libretto but it doesn’t have the stochastic elements of, say, Musik für das Ende.  It’s influenced by both traditional Japanese music and gamelan.  The instrumentalists are part of the action.  They play characters so they are choreographed and playing from memory.  Which leads to…

The production – The challenge is to realise the concept of somebody stepping from life into death and, along the way, meeting a variety of characters who if not quite psychopomps are something of that ilk.  Some of them are real people; Mozart, Newton etc.  Some of them are spirits; typically played by the instrumentalists.  There are both First Nations and Hindu influences in the choice of characters.  It plays out largely in greys and charcoals on a multi level set with, as previously noted, everyone in on the action.  There are rows of multi-coloured LEDs framing parts of the action. There are dancers.

Playing a dead person – Danielle is really into doing this.  It clearly plays to a deep spirituality in her.  She feels that the piece is not “denominational” but speaks to all of us at the level of spirit.  Her job is to communicate that; the “cosmic heroism” of Agni, to the audience.

I’m intrigued and just a little bit excited about this one.

Vivier’s Kopernikus is directed by Joel Ivany with music direction by Topher Mokrzewski and will play at Theatre Passe Muraille from April 4th to 13th.

The photo is by Don Lee from last year’s production in Banff.