The COC 2019/20 season was revealed last night at the Four Seasons Centre.  I liked the set up this time.  A brief introduction from Alexander Neef, an overture and then a well scripted narrative, read by William Webster, describing the works in turn  within the theme of “Once Upon A Time”, with a performance of one number from each opera.  And so, what do we get: 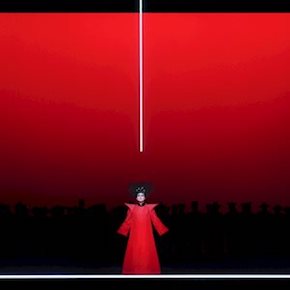 This is the Robert Wilson production from Madrid.  Tamara Wilson and Marjorie Owens share the title role with Sergey Skorokhodov and Kamen Chanev as Calaf and Joyce El-Khoury/Vanessa Vasquez as Liu.  Carlo Rizzi conducts.  I’m not a huge fan of Wilson’s elegant but static productions but I could see it working for Turandot.  I’m told the usual Alfano completion will be used.

This is David McVicar’s Chicago Lyric production and it’s, as one would expect, basically traditional with better drugs.  Sondra Radvanovsky sings the title role in one of the few really starry bits of casting in this season.  Matthew Rose/Stefan Kocan are Vodnik, Elena Manistini is Ježibaba, Pavel Černoch is the Prince and Keri Alkema the Foreign Princess.  Johannes Debus conducts.

Erin Wall sang the Song to the Moon.

This is a revival of the Els Comediants production seen in 2015.  Vito Priante sings Figaro, Emily d’Angelo is Rosina with Santiago Ballerini as Almaviva and Renato Girolami as Bartolo.  Speranza Scappucci conducts.  It’s great to see Emily featuring again at the COC but I can’t help thinking that if the rest of the cast is not going to “box office”, why not use a few more Canadians?  I imagine Frankfurt could spare some.

A cheeky duet from a very spritely Emily D’Angelo and a suitably outwitted Russell Braun. 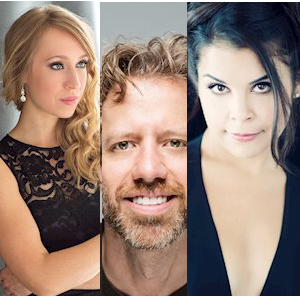 This will be Joel Ivany’s first entirely new production on the COC main stage.  Emily Fons sings Hänsel with Simone Osborne as Gretel.  Russell Braun and Krisztina Szabó are the parents and Michael Colvin is the Witch.  Johannes Debus conducts.  So it is possible to put a really good, largely Canadian, cast together.

This is the Tim Albery production seen in 2010 when it generated considerable controversy because it is gritty, raw and lacks elephants.  I thought it was the highlight of that season and I applaud the COC for reviving it.  It has an emotional punch too often lacking in a piece like Aida.  This time Tamara Wilson sings the title role with powerhouse tenor Russell Thomas as Radames.  Clémentine Margaine is Amneris.  Jader Bignamini conducts.

This is the Christopher Alden production also last seen in 2010.  This time the Dutchman will be Vitalij Kowaljow.  Marjorie Owens sings Senta with Dmitry Ulyanov as Daland, Miles Mykkanen as the Helmsman and Michael Schade as Erik.  Johannes Debus conducts

So what can we say about the season as a whole?  It’s well balanced with something for pretty much everyone but it’s conservative.  The most “modern” work is Turandot and the earliest is the Rossini, so everything lies in a bracket 1816 to 1926, though Turandot pretty much ignores anything that had happened musically in the previous thirty years!

There are few international superstars.  Arguably the starriest are, in fact, Canadian; Radvanovsky and Braun.  There are welcome returns to the COC for the likes of Simone Osborne, Emily D’Angelo and Michael Colvin.  Otherwise casting relies rather heavily on the roving band of Eastern European and Italian journeymen/women.

There are only 45 performances (compared to 48 this season) and no Ensemble Studio show.  There’s an air to the whole season of “putting money in the piggybank” to help fund Parsifal (of which, no news), the Kentridge Wozzeck (expensive projections) and the new commissions.

And the predictions?  I was batting three for three at the half way point but it rather went down hill from there… So it goes.