This year’s fall production by UoT Opera is Kurt Weill’s Street Scene.  It’s a tricky piece in many ways.  It’s part opera, part Broadway musical.  The moods range from light comedy to something very much darker and lurking treacherously at its core is a sentimental streak that can easily overwhelm its merits.  Michael Patrick Albano’s production, coupled with Anna Theodosakis’ energetic and varied choreography, managed to keep the focus on the strengths of the piece and deliver a very satisfying evening at the theatre.

Choreography aside there’s nothing fancy about the production.  All the action takes place in and in front of a couple of tenement houses but the space is well used; the singers get to sing to the audience and it’s only cluttered when the director wants it to be.  Theodosakis’ choreography, featuring multiple dance styles from tap to jitterbug, is well integrated and feels organic.  It helps enormously that this year, as ever, the UoT program seems to have found a good number of singers who can dance, and dance very well.

Fairly unusually for a UoT Opera production most roles in Street Scene are not double cast so the cast reviewed is the one you will see if you go tonight or on Sunday with the non-trivial exceptions of Anna and Rose Maurrant and Sam Kaplan.  So let’s start there.  The two young lovers are sung by Matthew Cairns and Emma Greve.  They both have really nice voices.  Matthew, of course, just won Centre Stage with his somewhat unusual, slightly baritonal tenor.  Emma has a sweet voice with just a touch of the usual young soprano issues in the upper register.  They both inhabit their parts.  Matthew is the earnest, slightly dorky young man the plot needs.  Emma looks every inch the young lady who might just have a stage career if you wasn’t so respectable.

Then there are the senior Marraunts.  Tatiana Stanishich is a really good Anna.  It’s a mature portrayal of an unhappy and disappointed woman.  She sings well too.  The rather unlovely part of Frank has been given, wisely I think, to experienced professional Peter McGillivray.  His powerful vocal and physical presence help create a character who, if the work were set today, would be wearing a Trump baseball cap.  He’s brutish, nostalgic in the worst possible way and essentially unstable.  McGillivray brings out all these characteristics in full measure. 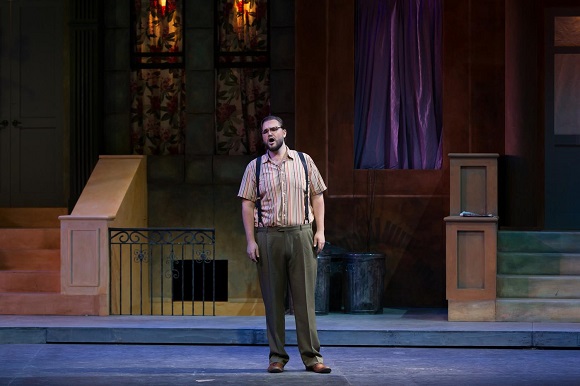 The rest of the cast is huge and the many “just a bit larger than cameo” roles are too many to detail.  I would single out though Caroline Stanczyk and Alex Bowie for an engagingly energetic performance as Mae Jones and Dick McGann.  Candidates for Drunkly Come Dancing here! 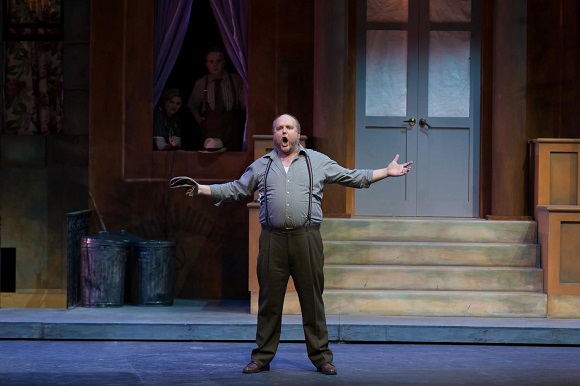 Sandra Horst was in the pit with the UoT Symphony.  The orchestra managed a good job of being jazzy but not too jazzy and Sandra produced a fine piece of pit/stage co-ordination given the business on stage.

Street Scene plays at the MacMillan Theatre in the music faculty building with shows tonight and tomorrow night at 7.30pm and Sunday at 2.30pm.