So back to Walter Hall at 4pm for the last of the Regen concerts featuring song.  This time Renee Fajardo and Jinhee Park kicked things off with a very fine set starting with Herr Schumann’s sinister Die Soldat and Frau Schumann’s Die Lorelei.  This was all smoothly and elegantly sung bar a slight tendency to push high notes.  There was some very impressive pianism here too.  The set concluded with Schoenberg’s Galathea; a bold and interesting choice, where Renee managed to create an almost cabaret timbre without ever sacrificing accuracy.  Nicely done! 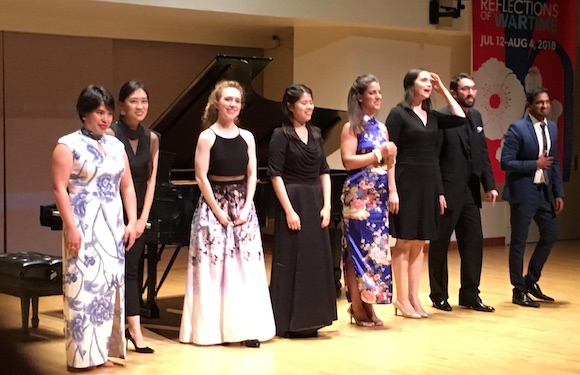 Maeve Palmer and Leona Cheung gave us Wolf’s Kennst du das Land and Strauss’ Säusle liebe Myrte.  Clearly Maeve is working on moving into this type of repertoire and it sounds promising.  There was control, power, excellent diction and a real sense of line.  Perhaps not quite the finished article, especially in the characteristically tricky Strauss, but enjoyable.

Mezzo Danielle Vaillancourt and Frances Armstrong gave us Wolf’s Verborgenheit and three songs by Alma Mahler.  It was all very smooth with appropriate phrasing and a sense of line but a bit monochromatic.  I could have used more colours and variation.

The final set came from Asitha Tennekoon with Pierr André Doucet.  Wolf’s Begegnung; an up tempo number, was navigated with appropriate agility.  Three darker Schubert songs followed which were sung with total commitment, good story telling and no little power.  One wonders in fact whether the voice has grown to the point where it could usefully be scaled back a bit in Lieder like these.  The finest Lieder singers tend to under sing a bit leaving plenty in reserve for the right moment.  Good stuff though.

The chamber element in this show was Lyndsay Promane with Steve Sang Koh and Julia Mirzoev (violins), Maxime Despax (viola), John Belk (cello) and Alexey Pudinov (piano) in  Chausson’s Chanson perpétuelle (which, ironically, is quite short).  This was a very pleasing, well crafted account with more rather lovely singing from Lyndsay.

I didn’t stay for the Dohnányi Piano Quintet that closed proceedings.