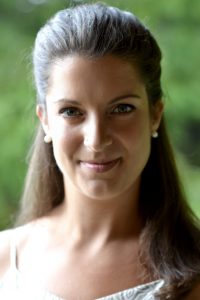 So it was back to Walter Hall at 7.30pm for Saturday’s second instalment.  This time the programme kicked off with the Schumann Piano Quartet in E flat Major Op. 47 before the singers.  The first singer up was mezzo Danielle Vaillancourt with pianist Jing Lee Park.  They gave us just two songs.  The first was Fauré’s Il pleure dans mon coeur followed by Duparc’s Au pays où se fait la guerre.  Vaillancourt has excellent French diction, a really interesting timbre and plenty of power.  This was pretty fine singing.  Jing Lee Park made the most of her chance to shine in the rather lovely piano part in the Duparc.

Renee Fajardo was next with Pierre-André Doucet.  She started off with Roussel’s Light which showed a light, bright voice but also an ability to darken it.  This was followed by a really touching account of Poulenc’s Prière pour paix before finishing with a personable account of Clara Schumann’s Liebeszauber which demonstrated very good German diction.  A nice set.

Lyndsey Promane gave us three songs from Britten’s A Charm of Lullabyes with Leona Cheung at the piano. First up was Sephestia’s Lullabye.  To be honest, surtitles would have helped here.  Robert Greene’s 16th century English is at least as hard to catch on first hearing as the Scots of A Highland Balou that followed.  The set finished with A Charm; a rather bad tempered “lullabye” to a child that doesn’t want to sleep.  This was all sung quite idiomatically with good interplay between singer and pianist; a must in Britten in my view.

The final set brought Asitha Tennekoon and Francis Armstrong to the stage for some Poulenc and Gurney.  Asitha coped very nicely with the surreal poetry of C by résistant Louis Aragon, showing excellent diction and expressiveness.  The Gurney songs; Sleep and In Flanders were perhaps even better with the latter’s invocation of the peaceful Cotswold’s in contrast to the battlefields of Flanders truly evocative.  A really nice set.

There was a Brahms Piano Quintet after the interval but I skipped out in the hope of not ending up completely exhausted with a busy work week and three concerts to come.