And so the final act.  First on stage was Emily D’Angelo; the only lady left in the competition.  It was an accomplished and varied set.  She started with a characterful and technically proficient Una voce poco fa followed by an appropriately lyrical Must the winter come so soon?  Coeur sans amour from the Massenet Cendrillon showed off excellent French before a suitably dramatic rendering of the Komponist’s aria from Ariadne.  Pretty much all the mezzo bases covered there and covered very well. 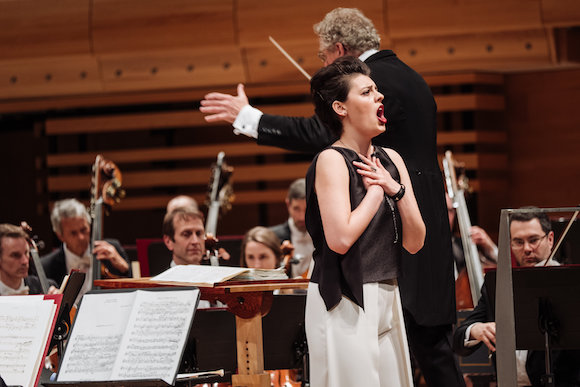 Andrew Haji was next.  Una furtiva lagrima and Che gelida manina were maybe obvious choices but they got the usual limpid, heartfelt Haji treatment.  I think it’s his obvious sincerity that makes him so convincing on stage.  His next number was an interesting choice; If with all your hearts from Mendelssohn’s Elijah.  This is not rep I associate Andrew with but I’ve yet to find any part of the lyric tenor rep that he can’t sing very well.  English oratorio proved no exception.  One could have been listening to Philip Langridge.  He finished up with La donne è mobile, sung with a nice sense of timing and excellent control.

John Brancy started off with a Rameau aria that was competent but which I found a bit underwhelming.  Maybe not the right piece to save for the final?  Ya vas lyublyu from Pique Dame though was stylish with a real sense of line and nice legato.   Per me giunto… O carlo ascolta from Don Carlo followed.  Again it was very good Verdi singing but I thought lacked the X factor.  Much the same could be said of the Bellini aria he closed with.  Somehow the bravura and sheer impact he showed in the art song semis wasn’t coming through.  Maybe competing in both competitions is just too much?

Russian bass Mikhail Goluvushkin closed things out.  It was a good set starting with that thing from the Jolly Maid of Perth that all the basses sing and going into decent versions of Ella giammai m’amòl from Don Carlo and an aria from Borodin’s Prince Igor. Solid singing that would likely have got anybody through the earlier rounds but didn’t really stand a chance after all the high octane tenoring.

And then came the inevitable wait before the announcements.  This felt even longer watching at home than it had on previous evenings in the hall!

1 thought on “The aria finals”