Hockey Noir; music by André Ristic, words by graphic novelist Cecil Castellucci, is a piece presented by Montreal based ECM+ and brought to Toronto in collaboration with Continuum and The Toronto Comic Arts Festival.  It’s described as a “graphic opera” which I suppose is OK as far as it goes.  I saw it as a theatre piece incorporating, and sometimes parodying, opera, musical theatre, film noir, the graphic novel and animation.  It’s set in the 1950s and riffs off the old tropes of Montreal/Toronto hockey rivalry and the entanglement of local government and organised crime in Montreal. 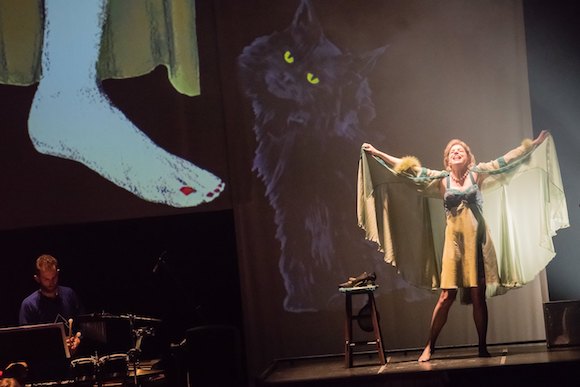 So, how does it work?  There’s a small on stage band combining acoustic and electronic elements.  There are four singers and an off stage narrator.  There are graphic novel style projections on the back wall; sometimes still, sometimes animated.  The surtitles, in English and assorted French dialects, are blended with the graphics.  So, visually it’s very busy and I did wonder whether it might have been better to put the band and highly kinetic conductor Véronique Lacroix in the pit (it was playing at the Jane Mallett so perfectly possible).  Visual overload was an issue for me.

The plot concerns the cup final between the Montreal Quabs and the Toronto Pine Needles.  Crime boss Romanov has bet big on Montreal losing and leans on Montreal star Bigowsky to throw the final game.  Romanov’s moll Lasalle has the hots for Bigowsky and is planning to overthrow Romanov and take over his turf.  Bigowsky’s teammate Lafeuille, a superannuated veteran, is looking at his last chance of winning the cup.  And sitting over all this is the off stage Sam Spade like figure of Loiseau who acts, in the classic sense, as Chorus.  To escape Romanov, Bigowsky disguises himself as a woman (and since Bigowsky is played by soprano Pascale Beaudin, we now have the “girls playing boys playing girls” trope) but can’t stay away from the arena where he coaches/encourages Lafeuille to play the hockey of his life.  With the Quabs down 3-1 going into the final period of game 7, Bigowsky turns up again to facilitate Montreal tying the game but before it goes to overtime there’s a gun battle in the dressing room (one might expect even the NHL to suspect something dodgy at this point but…). Romanov ends up in prison but returns to become mayor of Montreal, Lasalle takes over his empire, Lafeuille retires to fish in Stratford and Bigowsky becomes a broken down veteran; sans teeth etc.

All of this plays out in a slightly madcap way with a rather raucous score incorporating lots of electronics (the singers are miked but when and how much they were amplified I couldn’t really tell).  The vocal parts are quite interesting.  Both Bigowsky and Lasalle (mezzo Marie-Annick Béliveau) get chances to shine vocally as the score incorporates the occasional virtuosic parody of 18th and 19th conventions.  The guys (tenor Michiel Schrey as Lafeuille and baritone Pierre-Étienne Bergeron) get rather less opportunity for vocal display though both have plenty to sing and give effective enough performances.  The latter in particular growls his way through the piece in heavily Eastern European inflected English and French rather effectively.  Béliveau also displays great linguistic versatility going from Montreal Franco-English through (more or less) standard French to highly scatological Joual with aplomb.  Actor Jean Marchand manages the appropriate two packs a day noir delivery in the spoken role of Loiseau whose dialogue could have come straight out of Chandler.  (“The dame had curves that would throw Möbius for a loop” sort of thing).

The graphics (Kimberlyn Porter) are quite brilliant.  It’s often much easier to get a sense of character from the projected image than the actor/singer on stage (effective as they are) and the use of animation is clever.  Also there’s a cool cat.  The cascade of obscenities; bowdlerized in traditional fashion,  in both (un)official languages is also f***ing brilliantly presented.  One also has to congratulate director Marie-Josée Chartier for pulling it all together into something reasonably coherent.

In many ways it’s a crazy piece and for a few minutes at the beginning I found myself resisting it but it’s also oddly compelling and I found myself absolutely drawn into the implausible plot, crazy antics and visual and auditory overload.  80 minutes went by very fast.

Sadly, last night was the second of only two Toronto performances (and not well attended even so) and I think it’s next outing is in Brussels so it won’t be easy to catch.  It’s a pity as it’s the sort of thing that could become a cult classic with a bit more exposure.