I went to see Esprit Orchestra’s show Plug in at Koerner Hall last night.  I don’t often go to purely orchestral concerts but Jenn Nichols was dancing and I have this feeling that I ought to listen to more contemporary music.

The first piece; Symphonie minute by José Evangelista, is a highly compressed “symphony” in four movements.  Each movement only lasts a couple of minutes and it uses a large orchestra.  It’s intriguing that in such a short time each movement has a clearly defined character.  It’s quite dissonant but very easy to listen to and doesn’t outstay its welcome. 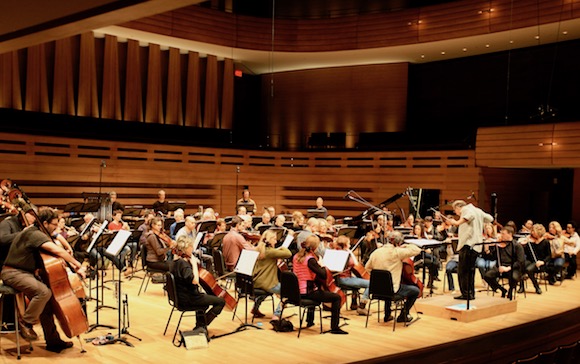 Eugene Astapov’s Hear My Voice was an interesting exercise.  It mixed a much smaller orchestra (mostly strings) with recordings of Alexander Graham Bell.  It’s lyrical and intriguing and asks questions about how our perception of music has been changed by the development of recording technology.

Matthew Rickett’s Lilt was a world premier with choreography developed and danced by Jenn Nichols.  It’s a rhythmically driven, complex piece that’s very beautiful in places, riffing on the idea of lilt.  Jenn’s choreography was intriguing; sometimes upper body intensive, sometimes much more mobile, it worked well with the music, often seeming to reflect quite subtle things going on in the orchestration.  Beautifully executed of course with a fine sense of line and overall body shape.

After the interval we left Canada for two works by internationally well known composers.  The first, Mannequin by Unsuk Chin is very typical of Continental European contemporary music.  It’s mostly loud and dissonant with occasional more meditative passages.  It’s in theory a “program piece” based on Hoffmann’s The Sandman but how one would find that in the music I have no idea!

The final piece recalled Robertson Davies’ comment about modern music sounding like “owls in a bicycle factory”.  Tan Dun’s Passacaglia: Secret of Wind and Birds uses orchestra and a recording of “birdsong” played on traditional Chinese instruments.  The schtick was that the audience were asked to download the recording to their phones and play it back when their section of the audience was cued by the conductor.  The orchestra too had brought their phones and in some passages dropped their instruments in favour of the “birdsong”.  There’s also chanting and lots of percussion.  My experience was typical of my experience of Tan Dun’s operas.  There are strikingly effective and beautiful moments but I have a hard time finding any real thread in the music.  Without visuals that’s even more of a problem.

So, a bit of an excursion off the beaten path for me but it’s good to see people programming whole evenings of contemporary music.

The photo is from the dress rehearsal.  Last night was more formal!