Last night’s TSO program started off with a sort of Remembrance Day pot pourri; pipes, bugles, a bit of poetry, an excerpt of Vaughan Williams in between and finally a rather beautiful account of The Lark Ascending with Jonathan Crow playing the solo from high up in the Gallery.  Once upon a time the TSO would do Remembrance Day by performing an appropriate work or works, Britten’s War Requiem for example.  I think that might actually be a more effective way of remembering. 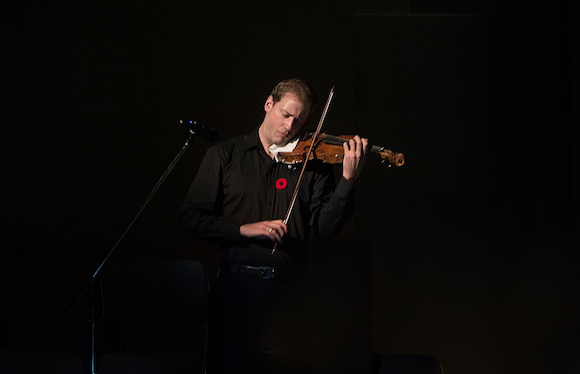 Still, the main event was just the right sort of piece and I could happily have taken it on its own.  It’s a new piece by Jeffrey Ryan that sets lines from the Latin Requiem Mass combined with words by poet Suzanne Steele who joined up with the PPCLI on a tour of duty in Afghanistan.  (There’s more on this experience at warpoet.ca)  So there are structural resemblances to the Britten work but whereas in the War Requiem we have a clear delineation between sections of the mass (for soprano and chorus) and Owen’s poetry (for the baritone and tenor), in Afghanistan: Requiem for a Generation the two parts are blended and there’s an underlying narrative.  Generally, the Latin is given to the adult and children’s choruses and set quite lyrically while Steele’s words are given to the four soloists with generally more abrasive, sometimes atonal music and sometimes even, spoken.  Steele’s texts are redolent of the discomfort and danger and, sometimes, the essential pointlessness of the Afghanistan campaign.  There’s a longing for home and a sense of wonderment at Nature but never, thankfully, bogus nationalism or sentimentality.  Although formally it’s nothing like Owen’s poetry it’s much closer to it in essence than it is to John McRae.

I though it got a really good performance.  All four soloists; Measha Brueggergosman, Allyson McHardy, Colin Ainsworth and Brett Polegato were quite excellent.  Allyson maybe had the most lyrical music of the soloists and made the most of it.  The guys shone in an oddly effective sequence in Pashto (Colin) and English (Brett) about buying, killing and eating a goat.  The Toronto Mendelssohn Choir and the Toronto Children’s Chorus sounded quite lovely.  The orchestra managed the tricky feat of almost having to switch “modes” on the fly.  Tania Miller conducted and made a coherent flow and whole out of the disparate elements.  She also ensured that her singers were never covered by the orchestra; a rare luxury at Roy Thomson Hall!

I think that Ryan and Steele have created something a bit special with Afghanistan: Requiem for a Nation.  It’s being given again in a almost identical program on Saturday.  It’s worth checking out.

1 thought on “Afghanistan: Requiem for a Generation”