Yesterday lunchtime in the RBA soprano Lauren Eberwein and the Rosebud String Quartet (Sheila Jaffé, Aaron Schwebel, Keith Hamm and Rachel Desoer) entertained us with a program of Haydn and Schoenberg.  First up was an arrangement of Haydn’s Arianna a Naxos.  We got the recitative, Teseo mio ben, and the two arias, Dove sei and Ah! che morir vorrei.  It’s basically a cantata with tessitura that sits very nicely for Lauren’s voice.  It was an elegant performance all round with some passion in the concluding aria.  And it’s always good to hear a Haydn vocal work. 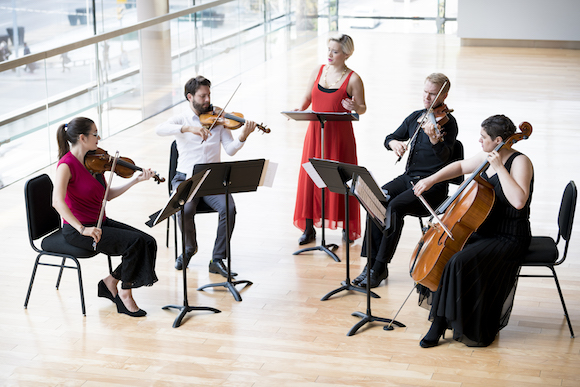 The main event though was Schoenberg’s monumental String Quartet No.2 op. 10.  This is a work that starts out more or less tonal in the first movement, less so in the second and pretty much any idea of a tonal centre is abandoned in the third and fourth movements where the strings are joined by soprano.  These two movements set texts by Stefan George.  The first movement is quite romantic and got expansive playing from the Rosebuds.  The second is almost a scherzo but with a definite dark edge.  It’s one of those pieces it’s fun to watch as the players toss the principal motifs around among themselves.

Then comes Litanei.  It opens “Tief ist die Trauer die mich umdüstert” (Deep is the sadness that gloomily comes over me) and it’s a plea to God for relief.  It’s marked :langsam” and that’s how it was played but especially towards the end there’s terrific attack required from the strings and a fiendish descending interval for the singer.  All of this was navigated with aplomb.  The strings were terrific and Lauren showed both the musicianship and the oomph needed.

The fourth movement sets Entrückung (Rapture).  It starts out most bdelicately on the strings, almost like a very classy SF film soundtrack which is not inappropriate given that the soprano comes in on the line “Ich fühle luft von anderem planeten” but the tension builds become almost frenzied (despite the marking of “Sehr langsam”) in the middle section.  It’s a workout for all the musicians before it slowly resolves into a sort of abnegation, closing on the line “Ich bin ein dröhnen nur der heiligen stimme”.  It’s ultimately a work of great beauty and that was fully conveyed yesterday.

So hurrah!  A chance to hear one of the seminal works of 20th century modernism at the Four Seasons Centre.  Let’s hope that the rumours of a main stage production of Wozzeck in the near future are true!