Rossini’s Maometto II is one of those pieces that has a somewhat complex performance history.  The recent David Alden production seen at Santa Fe and the COC was a carefully reconstructed edition of the original Naples production of 1820 which was considered musically radical at the time.  Two years later, for Venice, Rossini produced a new version with cuts, new music and borrowings from other works.  He also changed the ending to a happy one.  The net effect is a far more conventional bel canto opera.  That Venice version forms the basis of the only video recording in the catalogue, recorded at La Fenice in 2005. 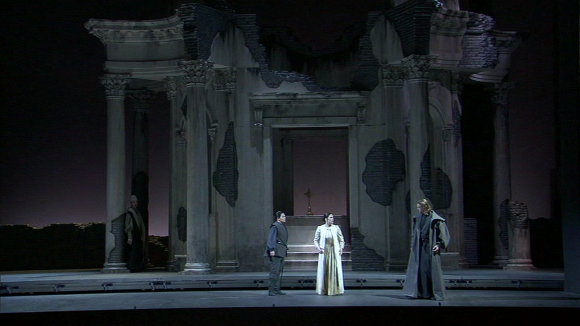 Pier Luigi Pizzi’s production is entirely straightforward with three roll on sets; a delapidated temple and a pile of rubble in Act 1 and a two level dilapidated temple above a vault in Act 2.  Costumes are sort of generic 16th century Middle East.  Blocking is rudimentary, mainly “park and bark” and the chorus is not used at all interestingly.  Even the battle scene is a bit lame.  The overall effect is to reinforce the feeling of a “concert in costume” where pretty singing is what it’s all about. 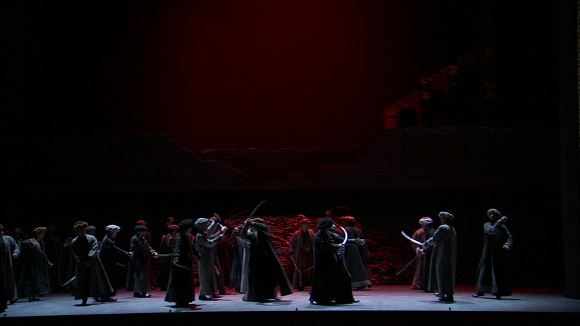 To be fair there is some really good singing and the singers do try to inject some dramatic life into their performances.  The star is Carmen Giannatassio as Anna and one can easily see why she has become a superstar.  She has a lovely, accurate voice of great flexibility, pinpoint coloratura and plenty of power.  There are just a couple of spots, in the final aria for instance, when the tessitura seems to sit a bit low.  Some of the revisions were written for a past-her-prime Colbran and are very low for a soprano.

Anna Rita Gemmabella is a more than adequate Calbo with excellent coloratura and fine phrasing though she’s about a foot shorter than Erisso, sung by Maxim Mironov, which looks a bit odd at times.  Mironov is excellent.  Top notch bel canto tenor work.  Maometto is the impressive Lorenzo Regazzo.  He’s the deal; a true bass with coloratura, which is exactly what’s called for.  His acting is a bit of a one dimensional glower though.  There’s an odd casting choice for Condulmiero.  In Naples this was a tenor role but in Venice the role went to a bass, which was necessary for changes in the Act 1 quartet but that left Condulmiero’s big number in Act 1 with a range well above what any bass could reasonably manage.  The answer on this recording is to use a countertenor, Nichola Marchesini, and transpose his quartet part up an octave.  He’s an old fashioned sounding counter tenor and the result, to my ears, is just weird. 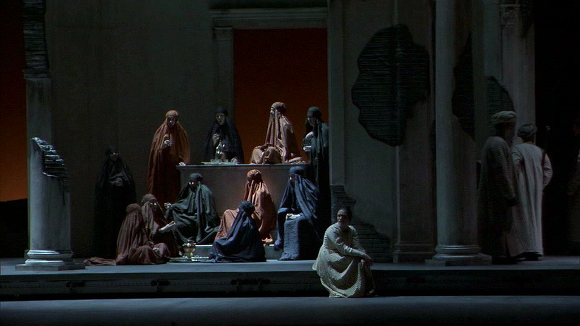 The chorus can sing well enough but they don’t seem too keen on acting.  The orchestra is fine and so is the conducting though I really think this opera, presented this way, is really all about the singing (and see technical discussion below).  I really didn’t notice the conducting of Claudio Scimone so I guess it was fine.

Although this is a 2005 DVD release it was recorded in HD and the picture is perfectly adequate.  The sound is interesting.  For whatever reason on the DTS track the singers are given the centre channel and the orchestra the left and right speakers (with the rear channels used conventionally).  The effect is to push the voices forward (which is also apparent on the PCM stereo track) though it’s pretty easy to get used to and rather reinforces the “singers’ opera” nature of the production.

There are no extras on the disk but the booklet is handy.  There’s a synopsis and a useful essay on the performance history backed up by a comparison chart showing what changed from Naples to Venice.  There’s a track listing too but as the entire 170 minutes is only split into fifteen tracks it isn’t very useful.  Subtitle options are English, French, Italian, German, Spanish, Japanese and Korean.