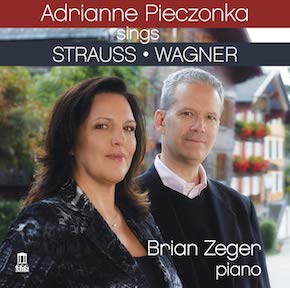 Adrianne Pieczonka has released a second disk of Strauss and Wagner pieces, this time with piano accompaniment provided by Brian Zeger. Two sets of Strauss songs sandwich the Wagner Wesendonck-Lieder, the only piece in common with her earlier disk with Ulf Schirmer and the Munich Radio Symphony Orchestra.

The Strauss pieces are all songs and, with the exception of Einerlei from 1918, all date from before 1900. None, I think, would be unfamiliar to lieder aficionados and most have been recorded many, many times going right back to the earliest days of recording. What then does Ms. Pieczonka bring to this crowded field? What most struck me were her clean, sweet sound and her relatively straightforward approach to text. Her Zueignung for example is much less aristocratic, perhaps less pompous, than Schwarzkopf’s famous recording with Szell. At the same time she is not as emotionally intense, perhaps overwrought, as Damrau (try her disk with Thielemann) or Mattila, as demonstrated in her recent Koerner Hall appearance. It’s all beautifully musical though and she can darken the colour when she wants/needs to as in the later, more chromatic Einerlei. She maintains her sweet tone all the way up to her highest notes without ever sounding harsh and can really float a note when she needs to. This is shown beautifully in Du, meines Herzens Krönelein and Rühe, meine Seele! in the second Strauss set. So, not the most dramatic Strauss one will ever hear but unfailingly musical and a perfectly valid approach I think.

The Wagner is quite a contrast with her earlier effort. She uses the additional freedom piano accompaniment gives to good effect in shaping the line. She also demonstrates fine legato in Der Engel and can crank up the intensity in Stehe Still! Her command of colour is there too with a much darker, more Wagnerian, tone coming in in Im Treibhaus. All that said it’s very striking how different these songs sound just with piano. I think it makes a bigger difference than with Strauss. In the two studies for Tristan und Isolde, for example, with orchestra it’s easy to hear the opera but much harder in the piano version. The sparer accompaniment also tends to focus one more on the text. This is perhaps a bit unfortunate because however attractive Mathilde Wesendonck may have been she was no Goethe. I really recommend listening to both versions. It’s really interesting.

This is a very decent recital disk in a very crowded field. I doubt it’s going to displace too many people’s favourite classic recording but it’s well worth listening to all the same.