Niccolò Piccinni’s La Cecchina or La buona figliuola is an opera buffa in two acts written for the Teatro delle Dame in Rome where it premiered in 1760.  The libretto is by Carlo Goldini and, while said to have been inspired by Richardson’s Pamela, is actually a fairly straightforward masters and servants story of a similar nature to Pergolesi’s La serva padrona or even Mozart’s La finta giardinera; all, of course, firmly rooted in the conventions of the commedia dell’arte.  Being written for Rome it was, originally, played by an all male cast.  Last night at Koerner Hall the Glenn Gould School Opera presented it with female singers in the high roles. 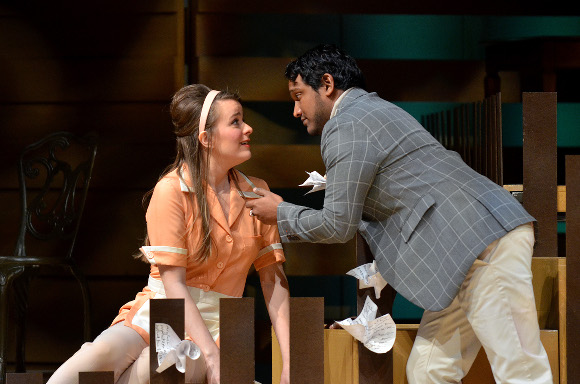 Kendra Dyck as Sandrina and Asitha Tennekoon as the Marchese

The plot is fairly straightforward.  The Marchese di Conchiglia is in love with his gardener, the beautiful foundling Cecchina.  She returns his affection but is too humble to admit it.  She is also being pursued by the bumpkin Mengotto which has seriously pissed off his former squeeze; the maid Sandrina.  Meanwhile, the Marchese’s sister is being courted by the noble Armidoro who is not best pleased at the prospect of marrying into a family whose head is contemplating marriage to a servant of unknown origin.  By the end of Act 1, Sandrina with the help of fellow maid Paoluccia have created utter confusion about who is carrying on with who, especially where Cecchina is concerned and she has vanished.  Impasse.

Then, in Act 2, a German soldier, Tagliaferro, shows up and explains that Cecchina is really Marianna, the daughter of his colonel who is a baron.  Apparently she was abandoned twenty years earlier during a “massacre”.  The maids do their best to cast doubt about this story but there is a birthmark and papers so eventually Cecchina/Marianna’s bona fides are established and everyone is free to marry within their station.  It’s a conventional happy ending but no-one except the Marchese seems to find it entirely satisfactory.

Marilyn Gronsdal’s production is clever and interesting and uses the limited staging resources of Koerner Hall rather well.  She takes on the deus ex machina nature of Tagliaferro’s improbable appearance and frames the story around it.  In Act 1, high above centre stage, we have a writer at his desk scribbling away and clearly running out of ideas as the act progresses.  During the lead in to Act 2 he has an “ah ha!” moment and climbs down to join the action as Tagliferro.  At the very end, as the somewhat hollow celebrations ring out, Cecchina climbs up to his garret, tears up the manuscript and throws it onto the stage.  It’s a neat device and puts some semblance of a credible wrap around the manic, but scarcely credible, comic antics.  The substantive plot is very competently presented with great comic timing, good characterisation and some neat visual touches.

Lynn Isnar as the Marchesa with Jocelyn Fralick as Count Armidoro

Musically the piece is very decent too though perhaps sounds a bit odd to modern ears as clearly has elements that look forward to Gluck and Mozart in the more lyrical moments and the extensive use of ensemble and even, perhaps, to Rossini in some of the patter work.  And then Piccinni will throw in a full blown da capo aria from time to time.  Armidoro gets some vocal fireworks in Act 1 and the Marchesa gets a full blown, Elettra stylee, invocation of the Furies.  Altogether a bit hard to understand why it isn’t done more often.

Casting was judicious.  The female roles were all cast from the GGS’ Artist Diploma Program.  Cecchina, who has the most lyrical music of the ladies, was sung by Jonelle Sills.  The music suited her fairly large, rather beautiful voice and she seems very at home as an actress with the earnest, homely sort of part.  The Marchesa, which is the Elettra/Vitellia role requiring both batshit insane coloratura and the ability to throw a world class hissy fit went to Lynn Isnar.  She was terrific throughout but especially in the “Furies” aria where she tossed off firecracker coloratura while wreaking havoc on a bouquet of flowers.  Looks good in beachwear too.  Jocelyn Fralick took on the trouser role of Armidoro quite effectively.  She showed very decent baroque style in her da capo aria and was convincing as the rather stuffy nobleman.  The two servants were played by Kendra Dyck and Lillian Brooks.  Dyck is, I think, a natural comedienne and she made the most of it here.  Her body language was really good.  Brooks, as I have noted before, is a very impressive singer and it was interesting to see her in what is mainly a supporting role with lots of quick fire duets and ensembles.  I would have been interested to see what she could do in something more central but no complaints at all about her Paoluccia. 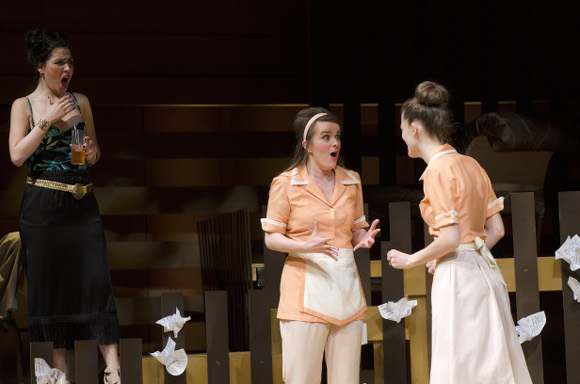 Only one of the three guys was a current student at the GGS; Kjel Erickson who took on Mengotto and was solidly reliable in a rather thankless role.  The Marchese, perhaps the role that requires the most varied virtuosity, went to recent graduate (and rising star) Asitha Tennekoon.  His rather beautiful lyric tenor was well suited to the music and he was convincing in portraying his character.  Tagliaferro went to Rebanks Fellow Bradley Christensen who played him as an elderly but swaggering cripple.  He has a very solid, reliable baritone voice and made the most of the part’s comic potential, especially in the cod martial scene with the Marchese.  Overall, this was singing and acting that would not have disappointed in a fully professional production.  Leslie Dala conducted a mostly brisk paced reading of the score with the Royal Conservatory Orchestra and Bram Goldhamer at the harpsichord.

Student productions can be a bit hit and miss but this one was well conceived and executed.  An unusual work is given an interesting and thoughtful production and it’s well sung and exceptionally well acted by a very well cast group of young singers.  It’s definitely worth a look.  There’s one last chance to see it on Friday at 7.30pm.