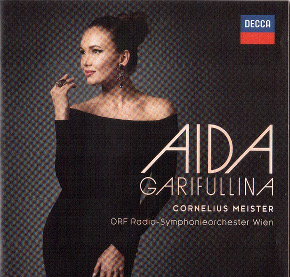 Aida Garifullina is a young lyric soprano of Tatar origin who already has some interesting achievements under her belt.  She played Lily Pons in the Florence Foster Jenkins movie, placed first at Operalia in 2013, has sung a string of -ina roles at the Marinsky and is currently a member of the ensemble at the Wiener Staatsoper.  She’s also done concert work with the likes of Dmitri Hvostorovsky and Andrea Bocelli.  Now she’s released a debut CD called Aida Garifullina recorded with the ORF Radio-Symponieorchester Wien and Cornelius Meister.

It’s a somewhat eclectic mix of material though I suppose that’s not unusual for such albums. There’s a fair bit of 19th century Russian material; some written for orchestra and some with the piano part rather soupily orchestrated.  There’s also some Gounod (Ah! Je veux vivre) and the Delibes Bell Song which she sang in the movie (and it’s transposed down a tone here too).  Add to that  a traditional Tatar folk song, a Cossack lullabye and Midnight in Moscow sung over the original 1962 balalaika track and I think you get the idea.

I really like the original operatic/orchestral material.  Not so much the rest.  The first two French tracks show off clean, clear high notes and very respectable coloratura though not perhaps as stratospheric as one might look for in a specialist.  In the Russian material, most notably some Rimsky-Korsakov arias from The Golden Cockerel and The Snow Maiden she shows the same controlled, gleaming top but also a really quite interesting dark mezzovoce.  I’d say Slavic but I don’t think Tatars are Slavs.

All in all Ms. Garifullina has a lovely voice and I’d guess a a very promising career.  Whether that’s going to be on the opera and concert stage or as some kind of crossover artist time will tell.  I hope it’s the former.