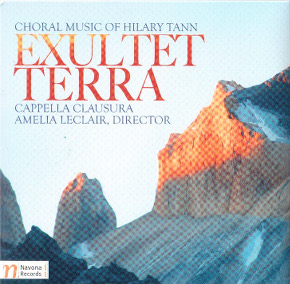 Exultet Terra is a disc of choral works (mostly) by Welsh-American composer Hilary Tann.  The first half of the disc consists of shorter works for  a cappella female chamber choir bookended by two pieces by Hildegard of Bingen in the latter of which the ladies are joined by the men of the choir.  The second half of the disc consists of Exultet Terra; a five movement work for chamber choir, two bassoons, two oboes and cor Anglais.

I started out enjoying this music but found an hour of it was just too much of the same thing given that the music leans to the sweet and bland.  Especially in the first half there just isn’t much contrast.  It’s mostly high voices weaving rather impressionistic, entirely tonal lines without much regard for articulation of the text.  Add some tubular bells and it would sound positively new ageish.

Exultet Terra is rather more interesting.  The heavier use of male voices and the woodwinds provide a more complex sound palette though it’s still used within a harmonic range that would have raised few eyebrows in the 18th century and again seems more concerned with creating an impressionistic soundscape than anything to do with the text..  It rather makes Beethoven sound aggressively modern.  It does liven up a bit for the final movement though.  The singing has a bit more attack and there’s some rhythmic interest but by then I was dozing.  It’s really a shame more was not made of the texts because they are an interesting mash up of George Herbert, Latin and English psalms, the Vulgate and the King James Bible.

The choir is Capella Clausura, here using four singers to each voice.  It’s a group that was founded specifically to sing music by women composers and it’s highly competent.  At least I assume the impeccably blended sound is what the composer wanted.  The woodwinds too are in highly capable hands but they don’t get much of interest to do.

It’s a studio recording and admirably clear which is a definite plus.  A more reverberant acoustic could easily have dissolved this to mush.