Eugen d’Albert is largely forgotten as a composer but his seventh (of twenty) opera, Tiefland, is still performed occasionally in German speaking countries.  It’s an odd work.  The plot is melodramatic with a cloying degree of sentimentality; sort of Mascagni meets Gounod, while the music is like pastoral Wagner (think the way the woodwinds are used in Tristan) with touches of Carmen and, just occasionally, hints of Sullivan (one of d’Albert’s teachers).  For a 1903 work it feels curiously retro.

The plot, such as it is, concerns a rich land owner, Sebastiano, who is in financial difficulties and needs to marry a rich heiress pronto.  This is complicated by his mistress, Marta, a  beggar girl procured by him at the age of thirteen, who must be got out of the way.  The plan is to marry her off to a shepherd from the mountains who is apparently one of only two people in the entire district who doesn’t know what’s going on.  The other being the saintly old man who suggests the match.  In return, they will get the mill which seems to be the hub of Sebastiano’s agri-business empire.  Eventually the shepherd, Pedro, finds out what’s going on and kills Sebastiano before heading for the hills with Marta. 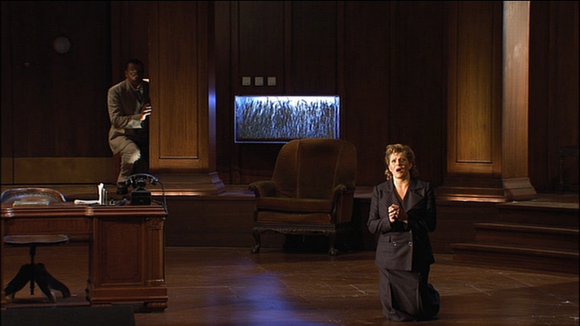 Matthias Hartmann’s 2006 production for Opernhaus Zürich is mostly straightforward.  The action plays out in the mill which is sutprisingly spiffy.  It looks more like, say, the Gibichungs; Hall in a steampunk version of the Ring than a place for grinding corn.  There’s one curious twist.  In the prologue, which takes place in the mountains, the characters are wired up to some sort of steampunk virtual reality system with their images projected onto a mountain landscape above the stage.  This reappears at the end when Pedro and Marta take off. 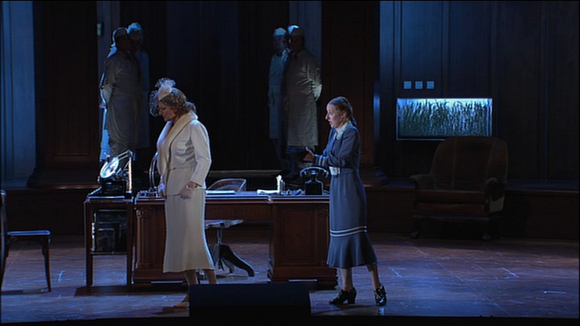 The music is sufficiently Wagnerian to require a Wagnerian cast.  Pedro is sung by Peter Seiffert who gives it the full on Heldentenor treatment rather effectively.  He’s matched by Matthias Goerne as Sebastiano.  He too sings powerfully but dramatically is not perhaps quite obviously evil enough.  I rather suspect this piece really requires aseriously over the top villain portrayal à la Bryn Terfel’s Scarpia perhaps.  Marta is effectively played and sung by Petra Maria Schnitzer who does a pretty good job of making her character believable despite a truly Dickensian back story and a tendency to spend much of the opera inviting men to beat or murder her because she’s a “fallen woman”.  There’s a nice cameo from Eva Liebau as the naive servant girl Nuri, who also gets one of the few bits of music that could be called an aria.  Franz Welser-Möst conducts and basically goes for an eleven on the highromanticismomemeter, which totally makes sense. 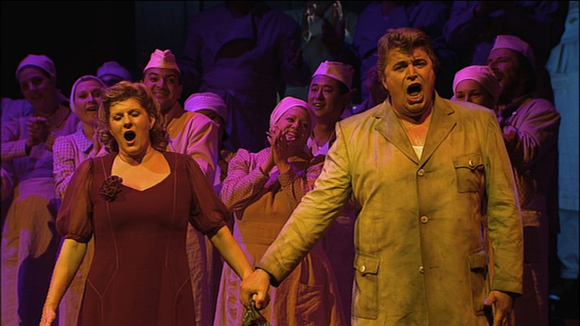 Felix Breisach directed the video and he’s his usual unobtrusive but effective self.  DVD sound (DTS 5.1) and picture are perfectly good modern DVD standard.  The only extras are some trailers and the booklet has an essay (in excruciatingly small print) that doesn’t tell you anything you couldn’t find on Wikipedia.  Subtitle options are English, French, German, Italian and Spanish.

I don’t think this is a neglected masterpiece but it’s interesting as an example of the sort of opera that was being composed in the early 20th century that has not become canonical and it certainly is given excellent treatment by the Zürich team.