Katharina Wagner’s take on Tristan und Isolde recorded at Bayreuth in 2015 is hard to unpack.  There are some hints in a short essay in the booklet accompanying the disk and a few more in the interview with conductor Christian Thielemann included as an extra but it still leaves the viewer with a lot to do.  It’s essentially unromantic and quite abstract.  A lot of stuff that happens in a traditional interpretation just doesn’t happen but there’s not really anything much to replace it.  What’s left is the story of two people who fall in love in a situation where that is bound to end badly and where, despite the best efforts of pretty much everyone else, it does.  It’s actually quite nihilistic.  Tristan, and maybe Isolde, seek a kind of transcendence in love/death but there is none.  At the end Isolde doesn’t die but something in her does.  It had me thinking of Bergman’s The Seventh Seal (but then so much in life does). 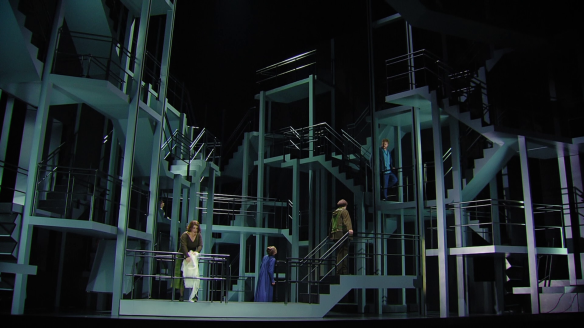 Along the way there are some intriguing moments, some very beautiful moments and some frankly WTF? moments.  Act 1 is played out on a sort of almost Escheresque labyrinth of gantries and stairs which seems to conspire, ultimately unsuccessfully, with Brangäne and Kurwenal to keep the lovers apart.  Act 2, especially O sink hinieder, has a kind of sci-fi quality with changing figures silhouetted against bright lights (2001? Solaris?) and with Marke and Melot watching the “action” from above.  In keeping with the stripped down inevitability motif there’s not even a semblance of a fight between Melot and Tristan.  The former simply stabs him in the back.  In Act3 there’s an extended hallucination sequence in which Isolde’s are imagined in pyramids of light.  There’s headless Isolde, crumpled dummy Isolde, blood all over the place Isolde among others.  When the second ship arrives all we see is the lights go up on a previously dark part of the stage to reveal Marke et al.  Isolde doesn’t die at the end.  She’s led away by Marke leaving (dead) Tristan, Brangäne and a lot of corpses on stage.  Along the way there are many striking images; some of great beauty.  Does it work?  I’m not sure.  It rather reminds me of Castellucci’s Parsifal which I initially tended to dismiss but which then haunted me for weeks.

Musically there’s a lot to like.  Stephen Gould is an interesting Tristan.  He has a rather beautiful voice which is lovely to listen to but perhaps somewhat at odds with traditional ideas of the Held.  It’s an interesting foil for Evelyn Herlitzius’ Isolde.  She’s fierce, almost manic, at times but can also sing beautifully.  She also looks the part, which isn’t often the case with Isoldes.  It’s another very interesting performance.  Iain Paterson is a direct, vocally uncomplicated Kurwenal who has a lot to do on the acting front, especially in Act 2.  It’s good work.  Christa Mayer is a smooth and stylish Brangäne and Georg Zeppenfeld maintains the focus on beauty of tone with a rather lovely and sympathetic Marke.  Thielemann’s interpretation is a bit low key, in so far as a Tristan ever can be.  He makes it clear in the interview that he’s consciously rationing the “excesses”; feeding the “tiger” when, and only when, appropriate.  It fits the dramaturgy well.

Michael Beyer directs for video and seems set to be the new Brian Large.  He is, as ever, very fond of weird angles and overhead shots though mercifully not as obsessed with close ups as Large.  In this production, curiously enough, it works quite well.  There are carefully composed stage pictures that are actually more effective when seen from above.  It’s also a dark and sparsely populated stage much of the time which makes video direction especially challenging.  It also makes one glad that this was recorded in HD and released on Blu-ray.  Without that quality of picture I think this would be hard to watch.  The sound quality; both DTS-HD and stereo tracks, is a s good as the picture.  The extras are confined to the interview with Thielemann and a shorter and not terribly revealing chat with Gould.  Subtitle options are English, French, German, Korean, Chinese and Spanish.

I don’t think I’d recommend this disk as an introduction to this work.  The Barenboim/Chéreau La Scala recording might be better for that but there’s a lot to think about and some fine performances on this disk and for anyone seriously interested in this most complex piece it’s well worth a look.