Pfitzner’s Palestrina has had some pretty extravagant claims made for it.  Bruno Walter said “The work has all the elements of immortality”.  I’m not so sure.  The music is very appealing but it’s structurally problematic.  It’s ostensibly about Palestrina and the struggle to convince Pius IV that polyphony had a legitimate place in church music but while the first and third acts are just that they frame a second act that’s about the various squabbles at the Council of Trent, of which the question of music was but one.  I think it’s meant to be a satyr on church politics of the time but it feels heavy handed, overly long and introduces a vast number of minor characters.  These are not only confusing but probably make the work unstageable for all but the very richest houses.  There are over 40 named solo parts but only one is a woman (and she’s dead) so major Bechdel fail here too.  I think if one took a chainsaw to Act 2 a pretty decent opera might come out of it because the human story is quite affecting and the music is distinctive and rather good.  Although premiered in 1917 it’s stylistically anti-modern and would likely appeal to a lot of people who are not normally drawn to 20th century opera.

The production recorded at the Bayerische Staatsoper in 2009 is interesting.  Christian Stückl was chosen to direct and his experience at Oberammergau and with Jedermann at Salzburg is clearly evident.  Palestrina himself is the only character depicted as fully human.  Everyone else gets more or less distorted costuming and make up.  None more so than the rather terrifying Pius IV in the third act.  Palestrina apart the colour schemes are extreme (set and costumes by Stefan Hageneier); the heavenly choir is a weird green, most of Act 2 is black and white and there’s a return of the green, this time mixed with a purply pink, in Act 3.  The shape of costumes too is also quite surreal.  There are more silly hats than in the Royal Enclosure at Ascot.  It sounds over the top but it works very well to emphasize Palestrina’s humanity as well as the somewhat surreal nature of some of the Trentine debates.

Musically it’s hard to knock.  Simone Young conducts and brings out in full the lush Romanticism of the score.  Chris Ventris is a superb Palestrina.  He sounds great and brings real pathos to his portrayal.  He’s well supported by Christiane Karg as his son and Falk Struckmann as Cardinal Borromeo, the prelate who conscripts Palestrina in the cause of polyphony.  The rest of the cast of thousands does just fine too. 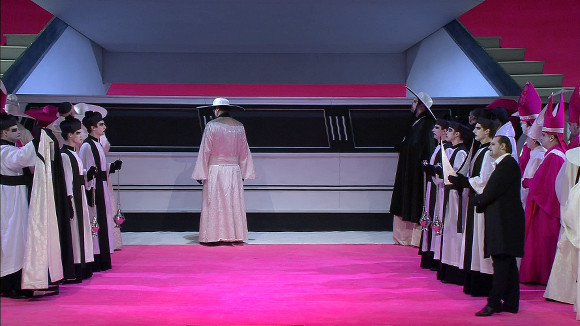 The video and sound (DTS-HD on Bluray) are really excellent and Karina Fibich’s video direction is unfussy and allows us to see the often quite intricate patterns of the production.  There is a short, fairly informative “Making of” feature as well as some trailers on the disk.  The booklet has a detailed track listing, a synopsis and a couple of essays about the work.  Subtitle options areEnglish and French.

This is the only video recording of this work and probably is likely to remain so.  It does a very good job of showing off an interesting, if flawed, work.