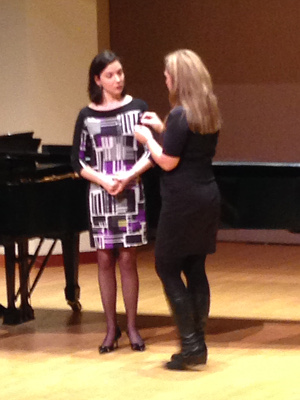 Yesterday’s Riki Turofsky master class at the UoT Music faculty was given by Sondra Radvanovsky which probably accounted for the almost full Walter Hall.  It was interesting.  I’ve only ever seen Sondra glammed up and seeming very much the diva and so I was a bit surprised that she proved rather down to earth and very technique focussed.  Four students sang but I’m going to focus on two.  Partly to avoid being repetitive and partly because they happen to be singers I’ve heard quite a bit and so was more able to see what Sondra was doing with/to them.

First up was soprano Danika Lorèn.  She chose to sing Ah! non credea mirarti… Ah! non giunge uman pensiero from La Somnambula.  It’s quite long and has two distinct sections; a slow, emotional “air” and then some crazy coloratura.  The first run through was good but Sondra had picked up on a couple of things.  She worked with Danika on improving projection in the slow part and on maintaining even timbre/colour in the coloratura.  Something I don’t think I was sufficiently aware of analytically listening to coloratura.  I knew when it just didn’t quite sound right even though the notes were all there but never really got that it was about the timbre varying with the pitch.  So with a couple of physical “tricks”, which would be really hard to describe in writing, Sondra produced a quite tangible improvement in both projection and intonation.  It was really pretty amazing.  Danika is such a great natural talent with an accurate, powerful voice and an easy upward extension and if she can pick up technique that fast should definitely be one to watch.

The other singer I was interested in was Lyndsay Promane.  She’s a very young mezzo with a lovely smokey voice.  And if the voice matures into a genuine opera house voice she’s certainly got the rest of the stage package!  She sang Va! Laisse couler mes larmes from Werther.  It was very nice and, in Walter Hall, big enough but cause to wonder whether it was a voice for a bigger house.  And that was Sondra picked right up on.  So they worked on some aspects of vocal projection and managing airflow for 15 minutes or so and, again, there was a tangible difference.  Probably even more noticeable than with Danika.  By the end, Lyndsay had found a way to make her voice “ring” without losing any of the dark colours and the tendency to fade at the the end of a long line was much reduced.

Masterclasses sometimes seem concerned with minutiae and it’s not always easy to see a really tangible impact.  That was certainly not the case yesterday.