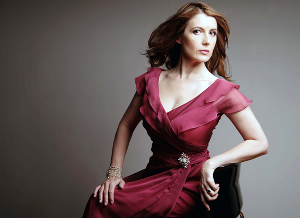 The second show for me yesterday was presented by Soundstreams at Koerner Hall.  It was a programme of works written since 1970 and featured Adrianne Pieczonka and Krisztina Szabó with a percussion heavy chamber ensemble conducted by Leslie Dala.  I’ve heard Krisztina a lot in contemporary work but it was a rare treat to hear Adrianne do something other than Verdi, Strauss and Wagner.  The “opera grind” as she put it in an introductory chat with Lawrence Cherney of Soundstreams.

Things kicked off with excerpts from George Crumb’s American Songbook.  The two singers get to sing, mostly, fragments of well known folk and popular songs (for example Dry Bones and When the Saints Go Marching In) while four percussionists play a vast array of instruments.  There’s a piano in the mix too and even the pianist solemnly intoning the lyrics of Hush Little Baby while the soprano sings a quite different arrangement.  It’s colourful, rhythmically exciting, very American and weirdly disturbing.  Great work from both soloists and the very athletic percussion quartet.

Next up was Krisztina singing the world premiere of Analia Liugdar’s Romance de la luna, luna; a setting of texts by Lorca for mezzo, oboe, harp, piano and lots more percussion.  It’s a beautiful text and complex, difficult, flamenco inflected music.  It’s got something but I would need to hear it several more times to come to any real appreciation of it.  I wonder if I’ll ever get the chance.

The first half closed out with Berio’s arrangements of three Beatles songs; Yesterday, Michelle and Ticket to Ride.  These are a sort of extended musical joke and a very funny one.  The texts, sung hear by Adrianne, are presented very plainly, which of course means, especially for the first two, very plainly indeed.  For all the icon status of these pieces they are very simple.  Then there are the ensemble “accompaniments” for flute, oboe, piano and strings.  The first is a sort of highly elaborate faux baroque basso continuo.  It’s so incongruous and so unlike anything else I’ve ever heard from Berio.  Michelle gets a treatment that starts out sounding a bit like Messiaen and winds up more like a Palm Court Quartet.  I think I was trying too hard not to laugh out loud to even get a description of Ticket to Ride, but I don’t care.

The second half was taken up by Adrianne’s first performance for 27 years of Crumb’s Ancient Voices of Children.  The text is again by Lorca and the setting, which includes a musical saw, is gorgeous.  It involves the singers; besides the female soprano there’s a boy soprano (here the very capable Andrew Lowe) doing a lot more than sing from music stands.  They have percussion instruments to play and some of the singing involves, for instance, singing into the piano case.  The instrumentalists also have vocal parts.  It’s beautiful, haunting and exhilarating music and I have a hard time imaging it getting a better performance.  One small beef, it would have been nice if there had been enough light in the hall to read the texts.

So, an unusual and highly enjoyable evening worth braving a rainy early fall evening for.  It also appeared to mark the opening of TB season in Toronto.