Gounod’s Faust is very French, stuffed with a specifically Catholic religiosity and has all the elements, welcome or not, of 19th century French opera; it’s long, it has ballet, there are interpolated drinking songs etc.  Alaina Viau and Markus Kopp’s adaptation Dissociative Me, presented by LooseTEA Music Theatre, is none of these things (OK there’s an interpolated drinking song, Stan Rogers even, but at least it happens in a bar) and it’s all the better for that.

What we get is the skeleton of the Gounod/Goethe version recast as the story of recent PhD graduate John; unemployed and extremely socially awkward, about to commit suicide when in steps his protective personality, Lee, who promises to show him the way to success, in return for cohabiting his mind.  Along the way he meets the rather naive Marguerite whose over protective brother, Steve, is leaving for the tar sands.  The inevitable happens.  When Steve returns to find his sister has had a baby.  He freaks which leads to a fatal fight with Lee.  Maggie snatches up the murder weapon and kills her baby with it.  After learning of Maggie’s homicide conviction at a drag club John resolves to bust her out of prison.  At the prison Maggie sees the Lee/John switch for the first time.  She’s mentally pretty far gone by this point and uses Lee’s knife to kill herself.  John realises what a monster he/they have become and does the only thing he can to end the horror.  Along the way there’s a scene with Steve and his mates in a bar and a box of jewels.  The narrative elements of Faust are all there but thoroughly subverted. 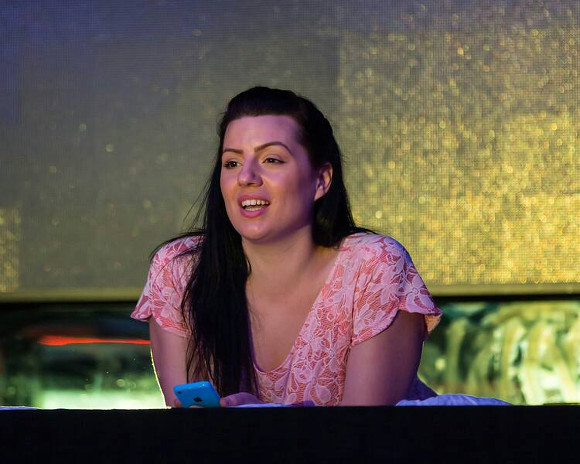 The staging is neat, clean and, at times, fairly graphic.  It’s staged at RED nightclub so some elements, like a bar, are in place and clever use is made of club lighting to change the mood in the whole space not just on the “stage”.  It’s given with piano accompaniment (Jennifer Tung) and an an “effects” track by Basil Kalmantis.  This makes for an interesting effect.  The voices used are, mostly, big and the piano is very much off to one side.  It comes over more like a movie soundtrack than the orchestra in a conventional opera.  This is reinforced by the fact that there’s a fair amount of spoken dialogue.  So despite having opera voices, and big ones at that, it isn’t “operatic”.  It’s very much its own genre.  This comes over rather starkly at the end.  There’s no big orchestral climax or heavenly choir.  It ends on dialogue.  Gounod didn’t write any music for this ending.

And so to the singing.  It’s really first rate.  Much better than you would expect in a low budget indie show.  The standout is COC chorus member Michael York playing Lee.  He’s a big man with a big voice and tremendous stage presence.  Quite menacing actually.  Kijong Wi sings John and he’s no wimpy tenor.  He has a big, almost Helden, sound.  It’s not pretty but it is dramatic.  He has the notes too, though last night he seemed to be having a few problems with raspy high notes.  Fortunately this seemed to disappear as the night progressed.  It’s been a couple of years since I’ve seen Beth Hagerman who sang Maggie.  She’s a good actress with a biggish, fairly dramatic voice too and it’s probably got a bit bigger since I last saw her.  In any event a good fit here.  Johnathon Kirby worked well as Steve.  Again, a fairly big sound and effective here someone not quite in control of himself let alone all the other people he’s trying to control!  Fabien Arciniegas and Jonathan Sandberg rounded out the singing cast doubling as Steve’s drinking buddies and, hilariously, as good time “girls” at the drag club.  Carl Lyons played the non singing roles of bartender and policeman.

The word “transladaptation” has been used to describe this show.  To many Toronto people that will call to mind Joel Ivany’s Mozart updatings.  To that extent its use here is quite misleading.  Viau and Kopp’s show is a much more radical departure from the original and in a different emotional and dramatic register.  It’s less an adaptation, more “based on”.  So, not the same thing at all but well worth seeing for its own merits.

Dissociative Me is being staged at RED nightclub in Liberty Village.  There are two more performances; tomorrow and Saturday, both at 7.30pm.  It’s club style so you can enjoy a drink at your seat.  Tickets are available here.