Donizetti’s Maria Stuarda featured in the MetHD series in January 2013 and has now been released on DVD.  My review of the cinema broadcast is here.  It’s always a bit different watching the DVD rather than the cinema version but in this case I think my somewhat different reaction has a lot to do with having recently seen various versions of the other Schiller/Donizetti Tudor queen operas, especially Stephen Lawless’ Roberto Devereux at the COC.

The issue is how does a director treat Schiller’s viewpoint?  It’s a massive exercise in very crude Catholic propaganda that might have come straight out of Douai and is utterly at odds with the view that most people in the English speaking world have of the events described ((assuming they have one!).  At the Met David McVicar deploys his trademark lack of subtlety to emphasize Schiller’s black and white version of events.  Elizabeth, striding around and snarling like Churchill in a dress, is utterly unsympathetic.  Cecil is unrelievedly pompous and evil.  Mary is presented entirely sympathetically despite, in reality, being a person whose behaviour managed to shock even the Scots.  I think it’s a valid approach but part of me yearns for the more subtle ambiguity deployed by Lawless.

So, it’s McVicar à l’outrance.  There are jugglers and acrobats.  The sets loom loomingly.  Cecil has a trademark bad guy beard.  There’s a big scary executioner.  And so on.  The performances tend to reinforce the effect.  Elza van den Heever, singing Elizabeth, has a rather heavy voice for bel canto as well as acting up a storm of masculinity.  Joyce DiDonato, on the other hand, gives a beautiful, lyrically sympathetic account of Mary.  The confrontation scene exemplifies it.  Van den Heever is all manic indignation while DiDonato is dignified even when spitting out epithets like “impure bastard of Anne Boleyn”.  The men, unfortunately, never really get beyong cardboard cutout status though they sing well enough.  Joshua Hopkins glooms his way through Cecil.  Matthew Rose does his best with Talbot and Matthew Polenzani seems rather miscast as Leicester, here presented as Mary’s lover (one of many I suppose).  Maybe it’s just that the role is so silly that no-one could bring it off to good effect but Polenzani just comes off as a romantic tenor who has wandered in from another opera by mistake.  Chorus and orchestra are predictably excellent and I couldn’t fault Maurizio Benini’s conducting.

Gary Halvorson is the video director and,as in the cinema, I thought the camera work was pretty awful.  Even when McVicar is setting out one of his big, garish tableaux, most of what we get is close ups; often from odd and unflattering angles.  Picture quality is good for DVD and the Dolby sound is quite good (though the stereo track seems very flat).  Neither are exactly state of the art and there’s no Blu-ray version.  There are the usual MetHD interval interviews (this time with Deb Voigt).  The booklet has a short essay and a synopsis.  Subtitle options are English, French, German, Italian and Spanish.

Joyce fans will want to have this disk and, despite the camera work, it’s an interesting example of McVicar’s recent work.  I’d really like to see what a more subtle director might do with this piece though. 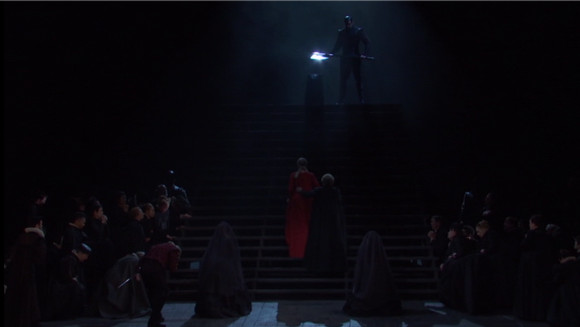 8 thoughts on “The Met’s Maria Stuarda on DVD”