So sings the heroine of César Franck’s early piece Stradella, Léonor, during her abduction and imprisonment by the Duke of Pesaro.  I felt pretty much the same watching the 2012 production from L’Opéra Royale de Wallonie.  The company has a well deserved reputation for reviving neglected works from the French repertoire.  I suppose once in a while if one does that one is pretty sure to come up with a complete turkey and, frankly, that’s how I’d classify Stradella.  Franck left it in piano score and it was orchestrated recently by Marc van Hove so the 2012 Liège production is the premiere.  The plot is essentially trivial.  Stradella, a singer and protegé of the Duke of Pesaro is in love with Léonor, an orphan.  They plan to marry secretly but the duke is also obsessed by the girl and has her kidnapped.  Stuff happens and they both end up dead and the duke repents.  Stradella and Léonor are united in Heaven.  The music is rather dull and highly sentimental.  The sentimentality is reinforced both by the injection of a bunch of morbid religiosity into the plot and the overuse of a children’s chorus.  In fact I ended up wondering whether “Stradella” wasn’t the brand name for a Belgian artificial sweetener.

Jaco Van Dormael, the director, seems to agree with this judgement and tries desperately to create something out of it.  He makes some odd changes to the original plot and chooses to set the whole thing in a pool of water weith lots of mirrors and weird lighting effects.  This might make sense for the opening scenes set in Venice but is a bit more puzzling when we are in the Duke’s palace or a church in Rome.  It’s very, very watery.  Also, for some reason, the duke has a sort of head dress made out of giant black balloons that make him look like Ming the Merciless in a really bad 1950s sci-fi movie.  The ending is just bizarre.  As best I can tell, Stradella becomes a giant fish and swims off to Heaven to join his beloved in a sort of bubble in which she’s rotating.  And there’s also the naked red head blowing giant bubbles durin the overture.  One would probably have to watch it more than once to figure all this out and I have no intention of doing that. 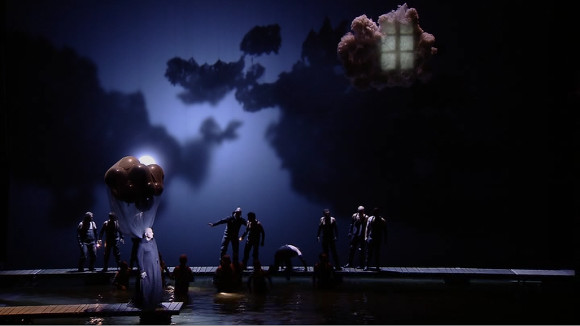 The music making isn’t bad but it isn’t good enough to save the piece.  Marc Laho as Stradella, despitre looking disconcertingly like Mel Smith, is probably the best of the bunch with a solid tenor and some attempt to project a character.  Philippe Rouillon is a serviceable duke.  It’s all rather bluff and straightforward but that’s the part.  I wasn’t too fond of Isabelle Kabatu’s Léonor.  Her top register sounds a bit squally but, as is often the case, that may be more an artefact of the recording than her voice.  Paolo Arrivabeni conducts and looks thoroughly bored by the whole thing.

Fréderic Caillierez directs for video.  It’s a tough piece to film with all the water, reflections and mirrors and I think he does OK.  The picture quality can just about cope with the many dark scenes.  The surround sound track is fine but the stereo alternative seems a bit challenged.  That may be an equipment issue though as I’m away from my regular set up. There are np extras on the disk.  The booklet has a synopsis, a track listing and an essay.  Subtitle options are English, French, Italian, German, Dutch and Korean. 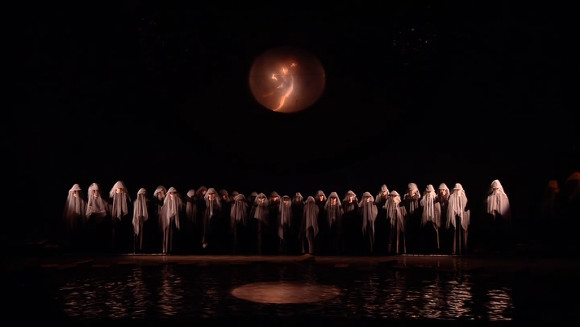 Really, I can only see this appealing to someone with a complete obsession with French Romantic Grand Opera and probably not even then.

1 thought on “I ask on my knees, as a blessing, for death”