Donizetti’s Lucrezia Borgia is based on one short episode in the storied life of the famous female pharmacist.  In it she twice poisons her son; once at the insistence of her husband, the second time by accident.  The second time her son refuses the antidote preferring to die with his equally poisoned buddies but learns in his dying breath that Lucrezia is indeed his mother.  It’s pretty unusual for a bel canto opera in that the leading female role (a) has agency, (b) doesn’t go mad and (c) doesn’t die.

This recording is of a John Pascoe production recorded at San Francisco Opera in 2011 with Renée Fleming in the title role.  It’s not exactly brimming with original ideas but the visuals are pretty good especially the costumes.  A lot of them have a kind of metallic sheen making the characters look a bit like animated statues.  Also Renée appears at one point in what looks like a foofy nightgown and brass corset.  I don’t think Christian Lacroix was consulted.  There’s also lots of action and a rather good party in Act 3 which features quite comely wenches and a bit of off stage Don Giovanni.  All in all it’s decent to look at and tells the story well enough. 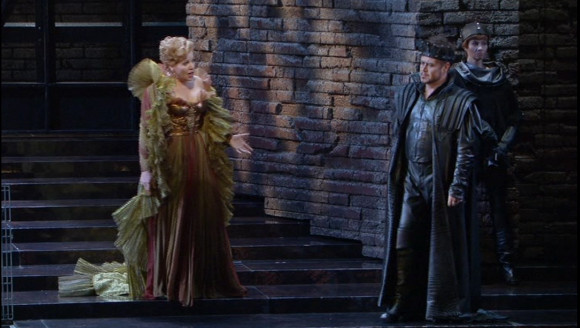 The principal performances are really very good.  Ms. Fleming displays her trademark beauty of tone and flawless technique but she also acts rather more than I’ve ever seen her do.  Maybe being the baddy brings out qualities we don’t often get to see?  Her son, Gennaro, is sung by Michael Fabiano.  He’s a very exciting singer and actor, as he showed in Toronto last year as Rodolfo.  He’s got great technique and a genuine ringing Italianate tenor.  He’s also tall and good looking and can act so is pretty much ideal as Gennaro, Venetian soldier of fortune who doesn’t realize until it’s too late that he’s a Borgia.  Gennaro’s sidekick and Lucrezia’s bitter enemy, Maffio Orsini, is sung by Liz DeShong.  It’s the first time I’ve seen her in a trouser role and, while she’s not your tall, elegant von Otter or Ernman type mezzo, she’s very good.  She sings well and uses the height difference between her and Fabiano to make a point or two.  She does a pretty good line in swagger too.  The principals are rounded out by Vitalij Kowaljow as Duke Alfonso, Lucrezia’s current husband.  It’s a perfectly sound portrayal of the the bluff, looming menace of the piece.  Riccardo Frizza conducts and he makes the orchestra sound pretty good.  It’s quite grand at times with some fast tempi in both solo and choral numbers.  In some ways the music seems to prefigure Verdi and Frizza seems to bring out that quality.

Frank Zamacora does a decent job of video direction.  It’s all largely straightforward and undistracting.  Video and DTS surround sound are both rather good (it’s also available on Blu-ray).  There are interviews with the three main characters included as a bonus.  The Fleming one is worth a look for her views on singing style and the relationship between bel canto and jazz.  The booklet has a track listing, a synopsis and very short production notes.  Subtitle options are English, German, French, Italian, Korean and Chinese.

This recording is definitely worth a look.