Mozart’s Die Entführung aus dem Serail is a problematic opera.  It’s got some great music but the libretto is pretty weak and its depiction of Turks is pretty unflattering.  Maybe it seemed edgy less than a hundred years after the Ottomans besieged Vienna but today it just seems mildly embarrassing.  Fortunately it’s a singspiel with dialogue rather than opera with recitatives so it’s fairly easy to play with the story line.  For his 1998 production Stuttgart at the Staatsoper Stuttgart, Hans Neuenfels goes much further.  He double each of the singers with an actor and pretty much rewrites the dialogue.  He also introduces an element of metatheatre.  This is a performance and everyone knows it.  For example when Pedrillo is asked how he’s going to get hold of a ladder for the escape scene he replies that he’ll use the one they always use in this opera. 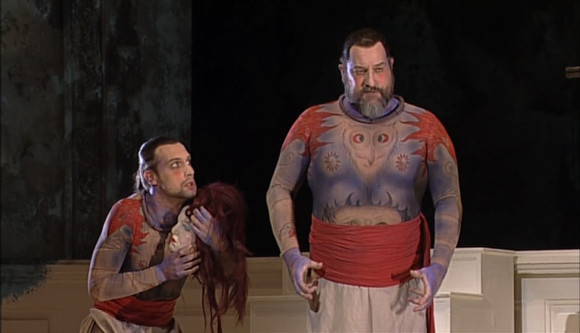 There’s lots going on in Neuenfels’ treatment.  There’s lots of interaction between the doubles, who share the dialogue, as well as between different characters.  There’s a fair amount of dismembered bodies and children spitted on pikes.  Blonde gets the dominatrix treatment , though here in an English riding habit rather than leather mini and boots.  (Have all German theatre directors had rather unusual experiences with English women.  It sometimes seems so).  FWIW parts of Blonde’s dialogues are in English.  The reference to being “chicken hearted” in “Frischt auf zum Kampfe” provokes a rather literal chicken-and-egg scene in which Death makes a rather odd appearance.  In the “discovery” scene the Osmins make rather heavy use of a basket of snakes and the whole affair concludes with Selim reading a Mörike poem and saying goodbye to Konstanze.  On the video there’s no applause and no curtain call.  My description makes it sound chaotic but really it isn’t though, as with all such productions, there are bits that probably made more sense to the director than the audience.  It really hangs together rather well and makes for a pretty satisfying theatrical experience. 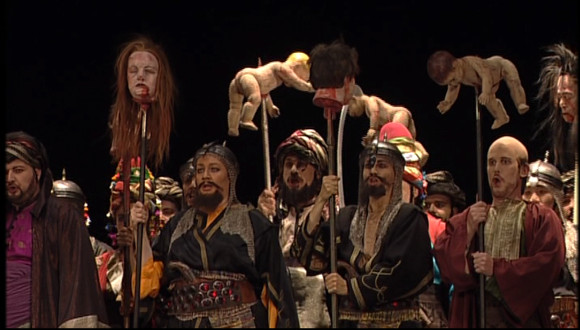 The performances are pretty good.  Catherine Nagelstad is a very stylish and accomplished Konstanze.  She’s spot on in the big numbers and acts well.  Kate Ladner is a very decent Blonde.  It’s hard to avoid the word “pert” with Blondes so I won’t.  Matthias Klink sings Belmonte and he’s pretty good most of the time though with maybe a tendency to bleat his high notes.  Heinz Göhrig is an engaging and pleasant to listen to Pedrillo and Roland Bracht is suitably pantomime villainish as Osmin. Conductor Lothar Zagrosek judges his tempi well and seems very much in sympathy with the production.  The Stuttgart orchestra is fine and the chorus perform their couple of numbers convincingly.

The actor doubles are very good too, especially Andreas Grötzinger as Osmin.  he’s a younger, slimmer, much more physically active incarnation of the character and really makes a very effective double act with Bracht.  The other doubles; Emanuela von Frankenberg – Kostanze, Carola Freiwald – Blonde, Alexander Bogner – Belmonte and Alexander von Heidenreich – Pedrillo are all very accomplished actors and work off their singer doubles effectively.  Johannes Terne’s Selim is central to the whole thing.  he lends real gravitas and more than a touch of tristesse, holding the whole thing together as something more than a madcap comedy.  It’s fitting that he gets the last word.

The video direction by János Darvas is judicious and undistracting.  The picture quality is not quite HD DVD quality and the PCM stereo sound is good but not up to the very best recent recordings.  The only extra is a character gallery.  The booklet has a detailed track listing and a ho-hum essay.  Subtitle options German, French and English.

This disk is worth a look.  The technical quality can’t match the more recent Amsterdam recording but I think there’s more psychological depth in Neuenfels’ concept and it may bear repeated viewings better.

10 thoughts on “Abstraction from the Seraglio”