And so, at last to Götterdämmerung.  The scene with the Norns is dark, very dark.  There’s a rope and not much goes on (at least that is visible) but the singing is good.  The “dawn” scene comes off more effectively here than the final scene of Siegfried but it’s still not great.  I think the problem is a combination of Manfred Jung’s dry, rather nasal tone and Boulez rather fast tempu.  It seems rushed rather than ecstatic and the Rhine Journey doesn’t thrill.  I was concerned at this point that I was being unfair to a renowned production so I put on the same scene from Kupfer/Barenboim.  It’s much better.  Siegfried Jerusalem sounds truly heroic, Anne Evans richer tone blends better than Gwyneth Jones’ (though this could be an artefact of the recording) and, crucially, Barenboim gives the singers room to sing before markedly speeding up for the orchestral music.  At least there is no naff attempt to depict a literal Grane in Chéreau’s version.  At the conclusion of this scene Brian Large pulls off the first of his artsy effects.  During the Rhine music he holds a close up of Brünnhilde for a rather long time before pulling out to a full stage shot which he then shrinks until there is just a tiny square of picture  in the middle of a black screen which, when he slowly expands it, has transformed to the Gibichung hall.  He does the same thing a couple more times.  It seems odd to introduce that kind of thing at such a late stage in the cycle.

The Gibichung hall is made up of massive columns.  Gunther (Franz Mazura) wears a dinner jacket, Hagen (Fritz Hübner) a suit with a sloppily knotted tie.  It’s clear who is higher status.Jeannine Altmeyer is an elegant looking and sounding Gutrune.  It’s all pretty straightforward but the singing is good and even Siegfried sounds better here though his acting is awful, indeed a bit reminiscent of the travelling player in Bergmann’s The Seventh Seal.  The Waltraute scene is fairly effective, though it’s not clear why Waltraute has also acquired a white night gown.  Predictably, there’s lots of smoke for Siegfried/Gunther’s return to the rock. 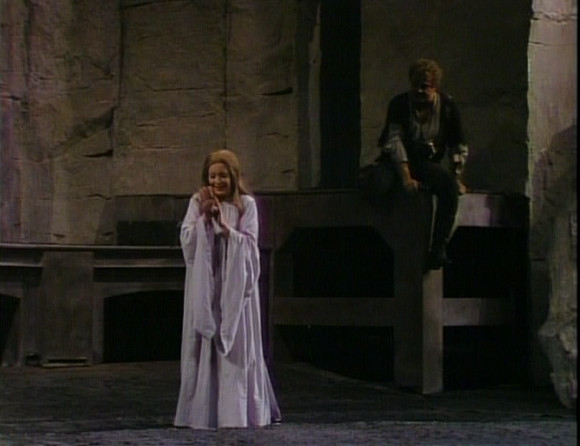 As Act 2 opens, the bank of the Rhine is quite literally depicted and the interplay between hagen and Alberich (Hermann Becht) is nicely played and well sung.  When Brünnhilde arrives she’s fierce.  This is a quality she will maintain to the closing bars in a very impressive performance by Jones.  The Hagen/Brünnhilde/Gunther trio is quite exciting. 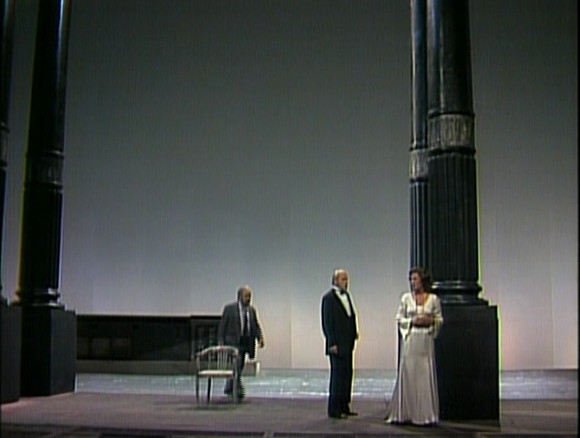 Act 3 builds steadily from the Rhine maidens scene, back at the power dam to Siegfried’s death and the horror of everyone, except Hagen, at the deed.  The Funeral March has Chéreau slowly building up a crowd from the chorus but it’s not enough for Large who superposes floating head shots all over the place.  Again it seems odd to be changing filming style at such a late point in proceedings.  Gwyneth is vocally outstanding here with a killer Starke Scheite schichtet mir dort.  She’s still in the white night gown thing and rather pale make up a serious case of soprano claw make her at times look like she’s escaped from Brides of Dracula.  The ending features lots of pyrotechnics and, predictably, a great deal of smoke.  It’s a pretty effective staging; not as challenging as Kupfer but far more impressive than, say, Lepage.

So, overall impressions of the cycle as a whole?  I think this Ring is a pretty mixed bag.  I found Chéreau’s overall vision clear, unfussy and straightforward.  I really couldn’t understand the fuss that’s been made about it being “Marxist” or “anti-capitalist”.  It may have had aspects that looked that way in the house but, if so, they aren’t obvious on DVD and I wonder whether some DVD reviewers have been more influenced by what they saw, or think they remembered they saw, in Bayreuth.  There’s also a fairly heavy layer of Brian Large on top of the stage production here.  It’s not a documentary recording of the stage production by any means.  Based on the production, as realised on DVD, I’d rate it as a good straightforward introduction to the cycle without anything very revelatory.  Closer to Schenk, in fact, than most more recent productions.,

The singing and acting is very uneven.  Manfred Jung’s Siegfried is a major drawback in the last two dramas.  Donald McIntyre’s Wotan/Wanderer can’t stand up to the best either, though it’s not without interest.  Gwyneth Jones’ Brünnhilde is thrilling, if at times a bit steely.  Most of the supporting cast are good to excellent with particularly fine contributions from Hannah Schwarz, Jeannette Altmeyer, Peter Hofmann and Heinz Zednik.  Boulez’ conducting is sometimes quite interesting as he explores details in the score but he lacks grandeur where it’s really needed.  The big Siegfried/Brünnhilde scenes should produce goosebumps and they don’t. 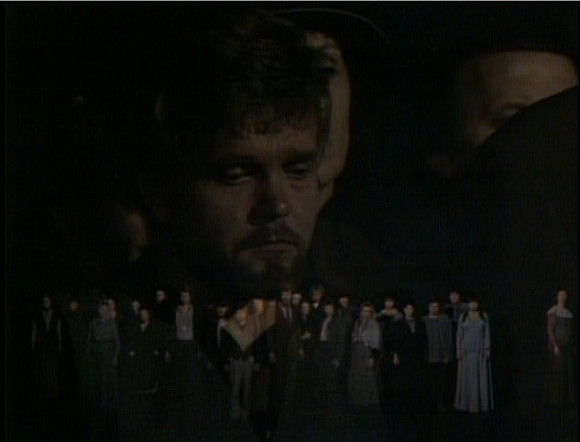 Would I recommend this?  Only to a completist or one with a deep interest in the history of Ring productions.  The Kupfer/Barenboim cycle recorded in the same theatre eleven years later is equal to or superior in almost every way.  The production is more conceptual but still not “out there” by modern standards.  Siegried Jerusalem and John Tomlinson are vastly superior as Siegfried and Wotan and Barenboim’s conducting is more Wagnerian.  Finally, technically it’s really rather good, having been recorded in analogue HD and given a very good Blu-ray transfer.  By contrast the Chéreau is, at best, 1980 TV standard.