Handel’s Giulio Cesare presents an interesting casting challenge.  The piece has four high voiced male roles; Cesare, Nireno, Tolomeo and Sesto.  The original production featured three castrati and a soprano en travesti.  I have never seen Sesto cast as other than a trouser role and Nireno and Tolomeo are invariably sung by countertenors.  Cesare himself though seems mostly to go to low mezzo/contralto types.  Indeed it’s seen, I think, as something of a “plum” trouser role.  (Which is interesting as in the production that i will get to describing in a minute, Cesare wears plum trousers).  I’ve seen both Ewa Podleś and Sarah Connolly in the role.  For their 2005 production Royal Danish Opera cast Andreas Scholl as Cesare.  It’s a good choice.  He’s a masculine looking and sounding counter tenor and at least he is taller than his Cleopatra.  It also makes for an interesting set of countertenors.  Tolomeo is sung by the much less masculine Christopher Robson and Nireno by the “more a male soprano than a countertenor” Michael Maniaci.  Sesto goes, conventionally enough, to Tuva Semmingsen, who seems very much to specialize in these types of role.  Apart from the countertenors the piece was cast from the considerable resources of the RDO ensemble with Inger Dam-Jensen as Cleopatra, Randi Stene as Cornelia, John Lundgren as Curio and Palle Knudsen as Achilla. 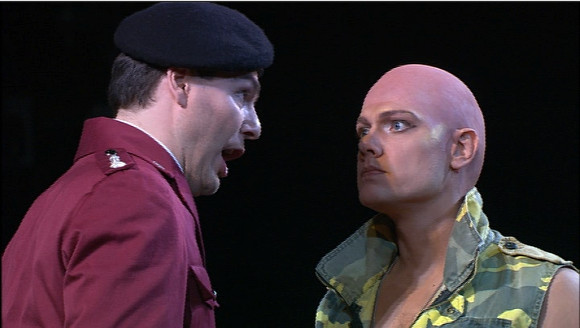 The singing and acting are of a very high order and each singer fully justifies their place in the cast.  Scholl is outstanding with absolute machine gun clarity in his coloratura and a compelling stage presence.  He’s well matched to his very sexy and athletic Cleopatra.  All her big arias are beautifully sung and range across the emotions.  She’s tasteful in her ornamentation in the repeats too.  V’adoro pupille is especially fine.  Christopher Robson is often extremely funny in a slightly over the top way but he really manages to convey the sheer nastiness of Tolomeo very well.  Palle Knudsen and Randi Stene play off each other well too.  This Achilla is really quite a noble, and very studly, version and it works well with Stene’s proud and aristocratic Cornelia.  Maniaci is fascinating.  At times he’s quite naturalistic and at others  he adopts the poses and gestures of an Egyptian carving.  It’s very interesting to watch.  At first I thought Semmingsen was just a bit too pretty and feminine to make a convincing Sesto but she’s grows in the role and the final scenes are really rather good.  Knudsen makes the most of his brief opportunities as Curio.  All in all this is a really good ensemble performance with terrific chemistry on stage.  The work in the pit is also exemplary with Lars Ulrik Mortensen leading a fine performance from Concerto Copenhagen. 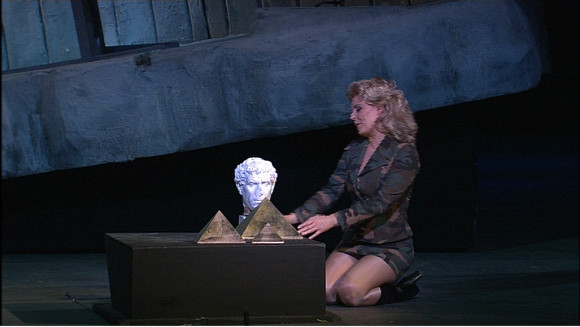 The production, by Francisco Negrin is extremely interesting.  It;s not without it’s comic moments but it comes off as much darker than David McVicar’s Glyndebourne effort and most other Cesares that I’ve seen.  It’s give a modern setting with the Romans wearing plum coloured uniforms in different “states” from full dress to camo fatigues.  The Egyptians get green/yellow camo and shaved heads though Nireno wears a bright blue outfit throughout.  There’s a lot going on throughout with clever use of raising and lowering platforms to suggest power and status changes.  Each and every scene seems well judged with convincing characterisations and clear story telling.  It’s hard to pick highlights though the contrast between “Lydia” seducing Cesare in a camo mini and Cleopatra in despair; shaven headed in her cell certainly show the range of emotions.  The second half is quite grim with Tolomeo, in ascendant, shown as cowardly and cruel and Cleopatra’s near suicidal despair quite palpable.  It all resolves though to a happy ending with a final scene that is very beautiful as well as musically and dramatically satisfying. 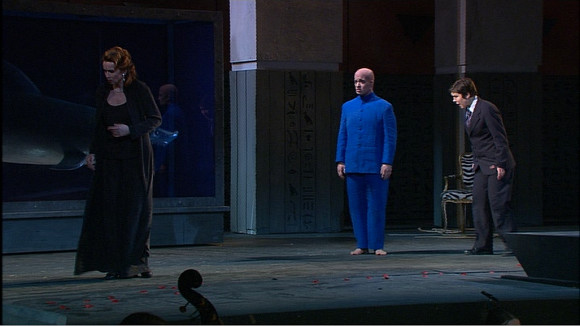 I don’t think it’s an easy production to film and there is a lot going on.  Thomas Grimm does a fairly conventional job with rather more than enough very close close ups but at least there are no gimmicks.  The picture quality is very good as is the sound with the DTS surround track very solid and vivid.  There are no extras but the documentation is decent with a cued synopsis and a chapter listing.  Subtitle options are Italian, French, German and English. 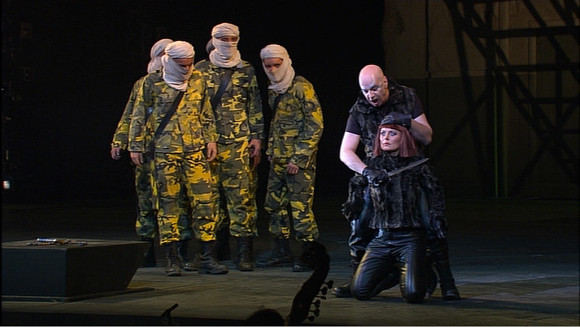 The main competition for this recording would be David McVicar’s Glyndebourne production which was pretty much designed to showcase Danielle de Niese’s talents.  The McVicar version is more overtly flirtatious and playful.  Negrin iis tougher, more overtly violent, though still wicked sexy.  Both have strong casts.  The Glyndebourne version is available on Blu-ray which is a plus.  If you were to ask me which to buy I’d say “both”. 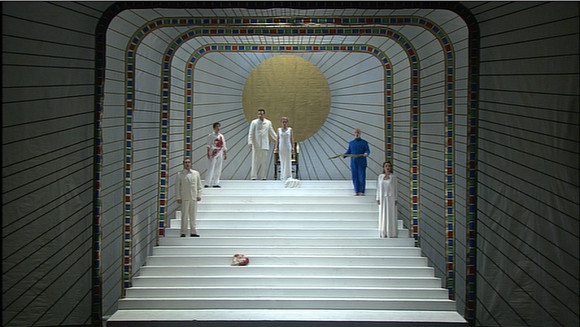 4 thoughts on “The three countertenors”