First a disclaimer, I’m not a huge Massenet fan and even among his works Don Quichotte would rate pretty low with its cheesy melodies and faux Spanoiserie.  However, a good production has the potential to liven it up and a stellar cast is always a plus.  The run that opened at the Canadian Opera Company last night certainly had the latter in Ferruccio Furlanetto, Quinn Kelsey and Anita Rachvelishvili.  Unfortunately Linda Brovsky’s production looked and felt like one of Mr. Peter Gelb’s attempts to get the Broadway audience into the Met.  It was cluttered, unfocussed, pretty much devoid of ideas and didn’t even really make best use of the acting talents of the principals though Rashvelishvili did her best to inject some life into it.  It’s exactly what I feared when I heard they were going to use a real horse and donkey (later replaced by a mule in one of the more recent of the season’s casting problems at COC).  For me, one of those productions almost best listened to with eyes closed.

To be fair, the production did have some things going for it.  The sets; made up of giant books and writing instruments, were interesting (though they caused long and noisy set changes) and projections were used effectively, especially in the battle with the giants, which was otherwise confused and pointless.  The flamenco dancers were pretty decent and injected some genuine energy even if their choreography veered towards the “rose in the teeth” flamenco-for-tourists style. 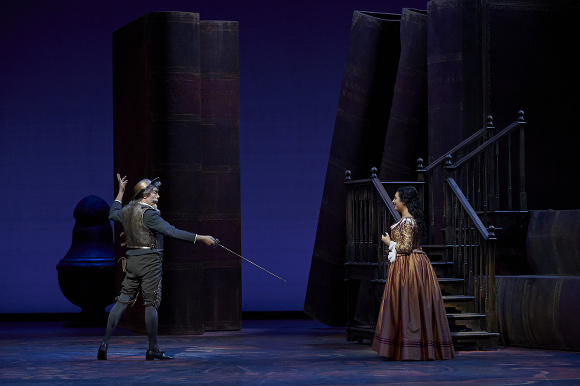 Rashvelishvili was in every way the best thing on show.  She sang beautifully, especially her big set piece arias in Act 4.  She also showed some spirit and Hispanic fire and came off as a rounded and believable character.  Furlanetto was lovely to listen to but he seemed to buy into the cloying sentimentality at the core of the production.  His various mock heroics could have been funny but ended up just looking sad.  Kelsey also sang well and did manage to provide some comic relief but it was all so broad and lacking in crispness.  Ensemble Studio members Sasha Djihanian, Owen McAusland and Andrew Haji were joined by Michel Corbeil and Ariana Chris in the supporting roles and again all sang perfectly adequately.  The contrasting tenors of Haji and McAusland in particular sounded good together but, again, most of the time the direction just had them wandering around to no particular purpose.  Needless to say the chorus was excellent, as it always is, but even Johannes Debus and his orchestra couldn’t do more with the score than make it pretty.

I’m sure people who like Massenet (they do exist) and fans of Broadway style productions will like this much more than I did and if that’s your bag there is some first class singing to be enjoyed.  There are six more performances between now and May 24th.