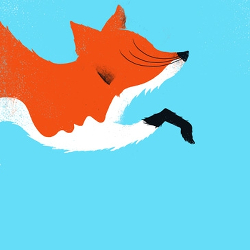 This year’s opera offering from the Glenn Gould School at the Royal Conservatory is Janáček’s Cunning Little Vixen.  It’s a pretty good choice for a student production with a wide variety of roles and it’s a great vehicle for showing off  the excellent Royal Conservatory Orchestra.  The school has chosen to present the work in English translation which probably makes sense given the difficulties of training a whole new cast in Czech even though it somewhat undermines the composer’s extremely tight linkage of text and music.

The production, directed by Ruth Madoc-Jones, was simple but quite inventive which is pretty much how it has to be given the limitations of Koerner Hall.  There’s a unit set of painted blocks which, with the addition of a few props, serve as forest, gamekeeper’s cottage and pub.  It works.  The animals are all somewhat anthropomorphized.  For example the vixen wears a red dress and thigh highs while her amour is in a suit and tie with make up and tails indicating their vulpineness.

Cunning Little Vixen is not a very grateful sing.  The vocal lines are, for the most part, less interesting than the gorgeous orchestration and the vixen’s part sits trickily high.  Heather Kozak made a very decent fist vocally of the title role and made a fine show of her considerable acting skills (and other assets).  John Kirby as the forester was a solid performer, singing and acting well, but maybe not really having the power to make the most of the big “Hymn to Nature” in the final scene; perhaps the opera’s vocal highlight but not easy to fully bring off.  Beste Kalender as the male fox was excellent with a really attractive mezzo voice and, again, very good acting.  Of the many smaller parts the star for me was Tristan Jones as the poacher Harasta who sounded like he would have made a very good fist of a larger role.  The Dragonfly was danced very well indeed by the one person involved in the show who doesn’t appear to get a programme credit (weird)*.  She was given classical but challenging choreography by choreographer Clare Preuss that had to be executed across and between the levels of the blocky set.  Her performance really contributed to evoking the forest atmosphere.  The orchestra under Uri Mayer sounded quite superb.  This isn’t easy music but played so well it’s gorgeous to listen to.  The chorus and children’s chorus, from Claude Watson School for the Arts, also made a considerable contribution.

This was another hit for the Glenn Gould school who have turned in some pretty impressive performances in the last couple of years.  There’s one more performance, tomorrow night at 7.30pm at Koerner Hall.

* Turns out the Dragonfly was Samantha Grist.  She, and Krista Deady who danced the Dream Vixen, are credited in the progrmme insert, not the nprogramme, simply as “dancers”.

7 thoughts on “Charming Vixen from the Glenn Gould School”