My acquaintance with Korngold’s Die tote Stadt has been pretty much limited to recital and competition performances of Glück, das mir verlieb, better known as Marietta’s Lied and, apparently, the last opera aria to become a hit single and Fritz’ act 2 piece Mein Sehnen, mein Wähnen.  So, I was quite glad to get my hands on a complete recording of this lushly lyrical and rather weird piece.  The “dead city” of the title is Brugge and the story concerns a wealthy man, Paul, who has turned his house, and his life, into a shrine to his dead wife Marie.  He encounters a dancer, Marietta, who very closely resembles his late wife.  What follows is wild and chaotic and is, ultimately, revealed to be a dream.  Paul realises that only in the next world can he be reunited with Marie. 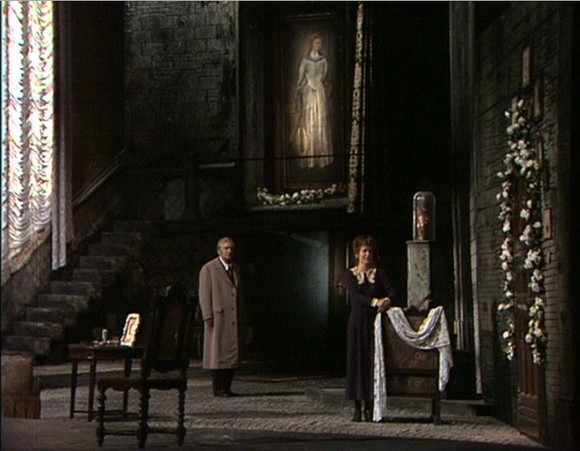 Götz Friedrich directed a classic production of the piece at the Deutsche Oper Berlin in 1983 with James King as Paul and Friedrich’s wife Karan Armstrong as Marietta.  It was filmed in the opera house but without an audience.  The sets and costumes are a fairly literal evocation of a wealthy bourgeois household in Brugge at the time the opera premiered (1923).  They are handsome and somewhat painterly.  The story telling is straightforward and the action unfolds by the book.  With strong acting performances from the principals; King as a brooding, just in control, “man on the edge” and Armstrong as a lively and flirtatious Marietta managing to look much younger than the 40 something she was at the time, it works pretty well as drama.

Musically it’s very good indeed.  Armstrong has a lovely voice and King manages the awkwardly high tessitura and the the general heldenish demands of his role very well.  William Murray makes an effective cameo appearance as Fritz.  Heinrich Hollreiser conducts and gets an appropriately lush sound out of the Deutsche Oper orchestra.  It really is rather lovely music.  Think a creepier version of Rosenkavalier or maybe the Gurrelieder.

The film was directed by Brian Large and he’s pretty subdued most of the time but then goes all artsy surrealistic in the Act 3 dream sequence.  I suppose if you are going to go kaleidoscope images that’s the best place to do it.  The picture is rather grainy and soft focussed (4:3) but the PCM stereo sound is perfectly OK.  There is a short interview with Friedrich and some trailers as bonus material.  Documentation is adequate but doesn’t really have much to say.  Subtitle options are English, German, French, Italian and Spanish.

This is ppretty good as an introduction to the work but both production and recording are showing their age.