Where better to record a production of Gounod’s Roméo et Juliette than in the spectacular Arena at Verona?  The productio, dircted by Francesco Micheli with sets by Eduardo Sanchi and costumes by Silvia Aymonino, is as spectacular as the setting and also quite weird in a space opera sort of way,  The characters wear huge collars and are colour coded; Yellow for the Montagues, red for Paris and his entourage and blue for the Capulets.  Only the non-feuding characters escape this schema notably, of course, the two lovers and Friar Lawrence.  There are also lots of colourful cage like structures that character pop in and out of or sing from and a huge chorus and crowd of supers flow all over the vast space.  It’s amazing to look at and actually suits a straightforward telling of the story quite well. 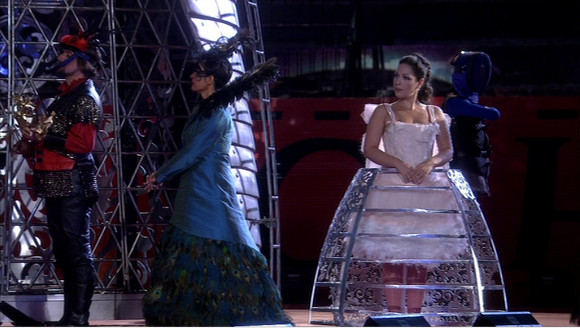 The performances pretty much match the setting.  Fabio Mastrangelo conducts a red blooded and very exciting reading of the score.  The singers are mostly excellent.  Stefano secco is an ardent, almost Italianate Roméo and Giorgio Giuseppini is a powerful and dignified Friar Lawrence.  There are very good performances from Artur Rucinski as Mercutio and Jean-François Borras as Tybalt.  I’m not so sure about Nino Machaidze’s Juliette though.  She looks the part and acts superbly but I just can’t warm to her voice.  Much of the time it’s fine and it’s certainly accurate and ardent but there’s a shrillness of tone in places that bugs me.  Of course this may be partly, at least, the recording but it’s quite off putting. 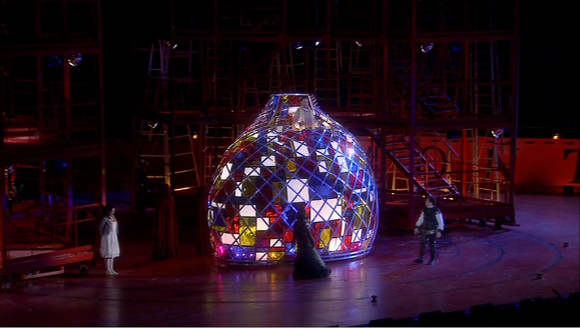 So what of the recording?  For the most part the orchestra and chorus are caught very well with a very wide dynamic and tonal range that sounds really good, at least on the Dolby surround track.  The soloists get rougher treatment.  Sometimes they sound fine but at others they sound shrill, muffled or disembodied.  It’s not easy i guess to record in such a big space.  It’s also very hard to video under these circumstances with singers often widely separated and huge forces deployed on an often dark screen.  Andy Sommer does his best with this, sometimes employing split screen techniques which would usually drive me nuts but here seem like a reasonable solution.  He does well but DVD video isn’t up to the full stage shots on this scale, even with HD filming.  I’d definitely go with Blu-ray on this but for the fact that I’m reviewing a library copy.

There are no extras on the disk.  Documentation is a chapter listing and synopsis and subtitles come in English, French, Italian, German and Spanish flavours.  This is worth seeing for the spectacular visuals and some red blooded music making.