Meyerbeer’s Dinorah ou le Pardon de Ploërmel must be a very strong candidate for the silliest opera ever written.  It concerns a young girl, Dinorah, who is deserted on her wedding day by her fiancé Hoël who disappears in search of a cursed treasure.  She goes mad.  There’s sheep and goat ballet, a lullabye to a goat accompanied on the bagpipes, more sheep and goat ballet and a scene where Dinorah sings a very difficult aria to her own shadow.  There’s a “ghastly” enchanted glen scene at the end of which Dinorah, pursuing her pet goat, falls into a river; apparently fatally.  Rather than resolve this we then get another half hour of pastoral with a hunter and a reaper and assorted shepherdesses and, inevitably, dancing sheep and goats before Hoël shows up having rescued Dinorah. He persuades her that the last twelve months have all been a bad dream and they get married accompanied by much pious singing. 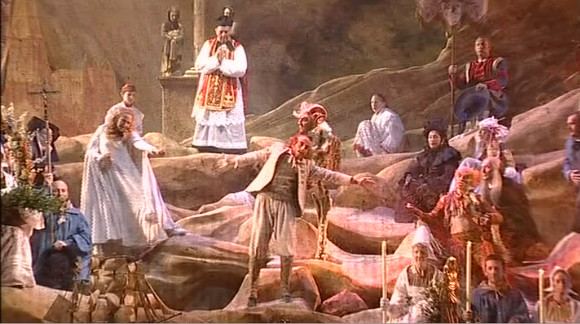 I really have no idea why anybody would bother to stage this thing but the Théâtre Française de la Musique did just that at the Théâtre Impériale de Compiègne in 2002.  The staging, by Pierre Jourdan, is either ultra-traditional or pushing into pastiche territory.  There’s lots of painted scenery, big lighting effects and very “operatic” costumes (including, of course, the sheep and goats).  The acting style tends to be rather arch and self knowing with characters striking poses.

The music is typical Meyerbeer. i.e. it’s all over the place and no excuse is missed to throw in a pretty tune or give the soloists a chance to be virtuosic.  Fortunately, in Isabelle Philippe, this recording has a very good Dinorah.  She copes well with the loopy coloratura (in a sense the role is just an extended mad scene) and she manages to act the unconvincing part quite convincingly.  She gets good support from the Hoël, Armand Arapian, and the cowardly shepherd Corentin, sung by Frédéric Mazzotta.  The other soloists are fine too and there’s good work from the chorus (Cori Spezzatti) and orchestra (Orchestre de L’Opéra d’Etat Hongrais Failoni).  Olivier Opdebeeck conducts and does his best with the rather messy score.  All in all, the piece gets rather better treatment than it deserves.

Technically this is very much a budget release (at least in North America) with Dolby 2.0 sound and hard coded English subtitles.  The picture and sound are OK though nothing to write home about.  There are no extras and barebones documentation.  Frédéric Variot’s video direction is OK though he’s very fond of the fade effect which gets a bit tiresome.

This is definitely one for Meyerbeer completists or sheep and goat fetishists.  We don’t even get to find out what happened to the pet goat.

7 thoughts on “My darling goat”