It’s beginning to look like Keneth Branagh’s 2006 film of The Magic Flute will never be shown in Canadian cinemas and so, when I saw it on amazon.ca for $7.24 I couldn’t resist.  Perhaps I should have.

This is not Schikaneder’s Die Zauberflöte in translation.  It’s a transladaptation by Stephen Fry in which the action has been transferred to a Disneyfied version of WW1 where Sarastro is going to use Tamino and Pamina to bring about World Peace (no less) through the healing power of Lurv.  Along the way we get naughty nurses, ballets of aeroplanes and the Queen of the Night on a tank.  It could work I suppose but it doesn’t.  There’s too much scmaltz and the libretto, while not sinking to the depths of The Enchanted Island, is pretty bad.  Worse, perhaps, it’s hard to sing and the female characters are often absolutely unintelligible.  As this is a film, not an opera DVD, there are no English subtitles.

There are some good performances; notably Rene Pape as Sarastro and Joseph Kaiser as Tamino.  Lyubov Petrova isn’t bad as Queen of the Night either.  Both Amy Carson as Pamina and Benjamin Jay Davies as Papageno seem to have been cast more for acting ability and looks than for the singing though they aren’t bad, just not what one might expect in the roles.  The Apollo Voices and the Chamber Orchestra of Europe under James Conlon sound pretty decent too. 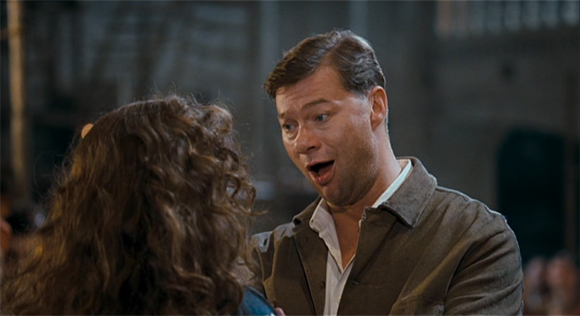 Technically it’s a high quality film DVD with acceptable surround sound.  There are interviews with Fry and Branagh.  Being a film DVD, there is no documentation, only French subtitles (and that probably only in Canada) and there are annoying trailers that can’t be skipped.

Despite its manifold weaknesses it’s still Mozart and there are some good performances and plenty of eye candy.  It still has the power to move in between the not infrequent WTF moments.